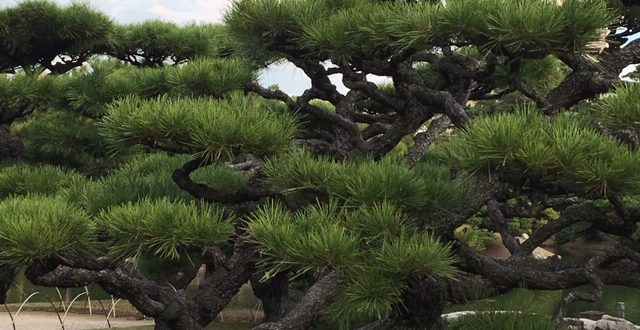 Last November, Lyn Potter travelled to Japan to see what Japan had to offer. This is the third installment about her journey. If you haven’t already, read Part One and Part Two.

Our next destination after Hiroshima was Matsayama on the island of Shikoku, a 90-minute ferry trip. We had heard that there was a famous onsen there so another adventure in public bathing awaited us.

As the museums were closed on Mondays, we decided to visit Matsayama castle on a hill overlooking the city. Being somewhat lazy we took the chairlift up. To my amusement John had a rather undignified exit at the top. The castle was built around 1600, with a large stone base with a three-story wooden tower at one end. It had been a mighty fortress in its time and was cleverly constructed to stop the enemy. But if they managed to come close there were plenty of apertures in the walls through which to fire arrows and heave rocks at them.

In the early evening we took the tram to the aged Dogo Onsen for a (segregated) bath. It was much more crowded than elsewhere, and it was our impression that many of the locals treat it as their bathhouse, bringing along their own soap, shampoo and other toiletries.

The following day we went to Takamatsu and took a long and leisurely walk in the Ritsurin Garden which has been designated as a ‘National Place of Special Scenic Beauty’. Here many pine trees have been artfully shaped and sculpted,

A highlight of our journey was a day trip to the art island of Naoshima. This small island with only 3000 inhabitants had a dwindling economy but since the 1980’s it has gradually been transformed into an island filled with installations, sculptures and Art Galleries. Not only has this beautified the island but it has helped to give the local economy a boost.

Afterwards we enjoyed meandering around in the sunshine to discover more artworks nestled in the forest and by the seashore including two gigantic spotted pumpkins, one yellow and one red, on opposite sides of the island. For art lovers this is an amazing place to visit and I would love to come back here and stay for a few days.

Our next stop was at Kotohira where a local Shinto shrine is the main tourist attraction. To reach the summit you have to climb 1368 stone steps which felt like too much of a mission for us although the thought of seeing this ancient shrine and the sweeping panoramic view from the top was tempting .

We had booked a noodle making class. It was an excellent choice as Kotohira is famous for its Sanuki-udon” noodles. The chef was a great showman with a sparkling personality who loved teasing the participants. He had the class in stitches but due to our lack of Japanese we had no idea what was so funny, not that we minded .

Fortunately, two kind-hearted Japanese (father and daughter) sitting next to us translated the instructions as the class progressed. For John the highlight was watching me dance to YMCA on top of the plastic wrapped dough in my Kathmandu socks, to make sure the dough was properly compressed. We planned to eat the noodles, which were carefully wrapped, for breakfast in our Iya valley farmhouse.

After the cooking lesson we were all presented with a certificate and a decorative scroll on which the recipe was printed before sitting down to enjoy a bowl of udon noodles which had been prepared in their kitchen. We have eaten a lot of noodles in Japan as they are a cheap, tasty meal but these ones were especially chewy and delicious.

The following morning we picked up our rental car and began our journey to the remote Iya valley for a stay on the mountainside in an ancient thatched roofed house farmhouse in Ochiai village. What we hadn’t anticipated was how narrow the road would be on the last part of the journey. I found it quite terrifying. From the passenger window I could see the sheer drop into the steep valley below (there were no barriers).

Once we were in our farmhouse I relaxed.The farmhouse was refurbished with modern furnishings and had a new kitchen. Adjoining the house was another small building containing a large bath to have a long soak.

Over the next two days we explored the Iya valley further. The trees were dressed in glorious autumn colours, russet red, orange and yellow, later than usual probably due to global warming. More narrow winding roads, in some places so narrow that if you met head on traffic one of the drivers would have to back up or down to find a place where passing was possible. John, being the more adventurous enjoyed the challenge commenting that drivers drive very slowly here so it was not too risky.

In the tiny village of Nagoro a curious sight greeted us. What from a distance could easily be mistaken as real people going about their daily life turned out to be very lifelike scarecrows. There are about 270 scarecrows and less than thirty villagers in Nagoro so it must be the only place in the world where scarecrows outnumber people by 10-1.

There is a heart- warming story behind them. Local resident Tsukimi Ayano came back to live in the village to look after her ailing father in 2002 after living most of her life in Osaka. All the young people had left over the years so to bring some life back into the village she began to create the scarecrows, quite a few of which are memorials to the old people who have passed away.

Another tourist attraction in the valley was the Kazura Vine Bridge. It cost 500 yen to walk across. Vine bridges such as this one were hastily constructed by warriors, who once they had crossed the river, destroyed it so the enemy could not follow. This bridge is now reinforced by cables and the bridge itself is regularly replaced so it is perfectly safe. There are sizeable 20 cm gaps on the floor of the bridge so you do have to watch your feet as walk across it which means you can’t avoid looking down to the river far below. For those who don’t like heights this can be little scary!

There were no eateries in Ochiai village. But when we returned to our farmhouse in the evenings, a chilly bin containing the ingredients for a beautiful Japanese meal arrived on our doorstep with instructions on how to prepare it.

As we sat down to enjoy our dinner, we watched the sun set over the tranquil valley below. Our stay here had turned out to be one of the best parts of our Japanese holiday. But all good things must come to end. We would all too soon be on our way home taking with us many great memories. 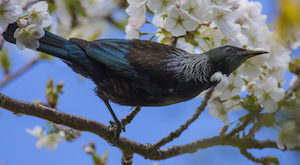