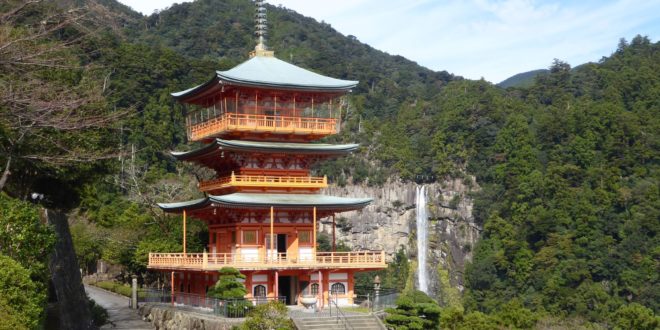 November is our favourite time of the year to visit Japan because of the beautiful autumn colours and because at that time of year the climate is usually mild and dry. So, we had once again booked a self-guided tour with a company called ‘Inside Japan’. They had booked our accommodation and made most of our travelling arrangements. And should we strike a problem their English-speaking staff were available to help 24/7. This suited us well as we love travelling independently.

We arrived in Japan on the day the World Cup finished, sadly not the celebratory day for the All Blacks we had hoped for, but by all accounts, the Japanese had been great hosts and had made them and their supporters very welcome. 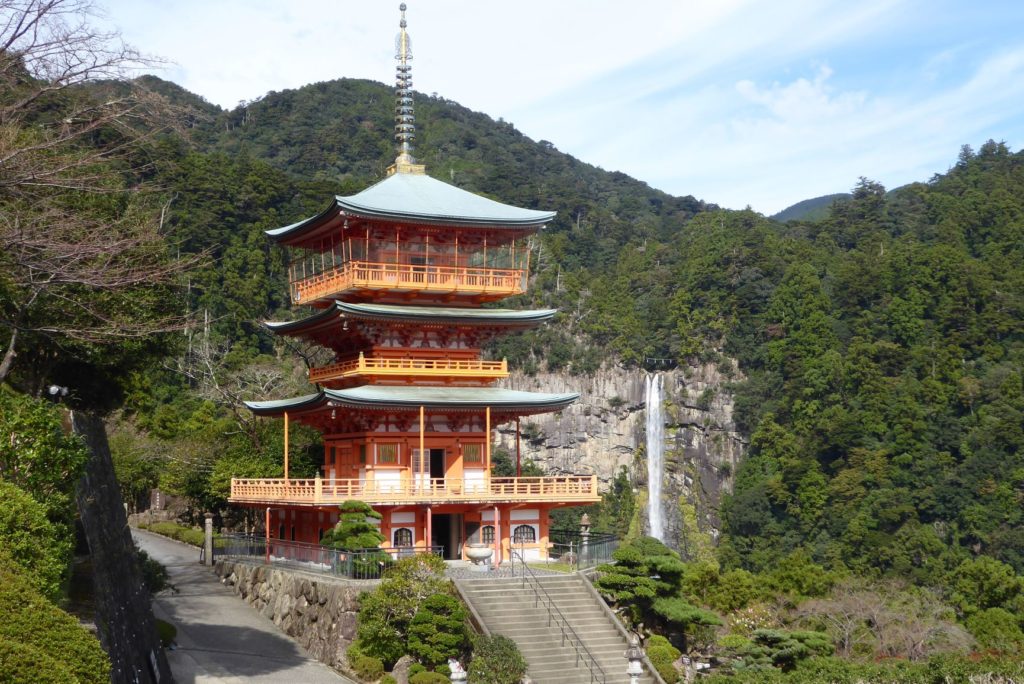 Our Air NZ flight was late leaving Auckland which caused a late arrival in Tokyo. Despite a mad dash through the airport for our plane to Osaka we narrowly missed it. The Japanese ANA ground staff were really helpful and transferred us to Haneda airport by bus to catch the last flight of the day from there. We were fairly weary when we got to our hotel in Osaka at 11.30 pm which was 3.30 am in NZ. Never mind, we had a full day to recover before leaving for the Kumano Kodo.

For more than 1000 years pilgrims have made their way to Kumano along various routes across the mountainous Kii Peninsula undertaking religious rites of worship and purification along the way. This area is known as the Kumano Kodo. It is registered as a UNESCO World Heritage site and is area of great natural beauty.

We spent our first night at Kawayu Midoria, a big hotel beside the Oto river with both inside and outside onsen (hot baths). For some delightful reason the hotel had upgraded us to the best “room” in the hotel on the top (9th) floor. Although it was far more palatial and spacious than we needed or expected we were not complaining! It included a European style bedroom, another large room where they laid out two futons for us on top of the tatami mats, a sitting room with a couch and two comfortable chairs, another room with great river and bush views and then three utility rooms. John felt suitably guilty rigging up a washing line to wash a few socks and jocks!

On our previous trip to Japan I had lacked the courage to go into in a public onsen but this time around I felt it was time to throw caution to the wind and take part in this very traditional way of Japanese bathing. We washed inside but then donned modesty swimming yakatas for the mixed sexes outdoor onsen. Having an early evening soak was so relaxing, I was hooked. Dinner that evening was served in the dining room. No forks or knives were provided, so as you do in Japan, we did our best with chopsticks.

The next day we went on a three-hour hike on part of the Kumano Kodo trail to view the Kumano Hongu Taisha grand shrine. The weather was just right, sunny and not too hot. The walk was mainly through forests of Japanese cedar and cypress trees, but also included small rice paddies and tea plantations. Getting closed to nature in this way was so relaxing and peaceful. 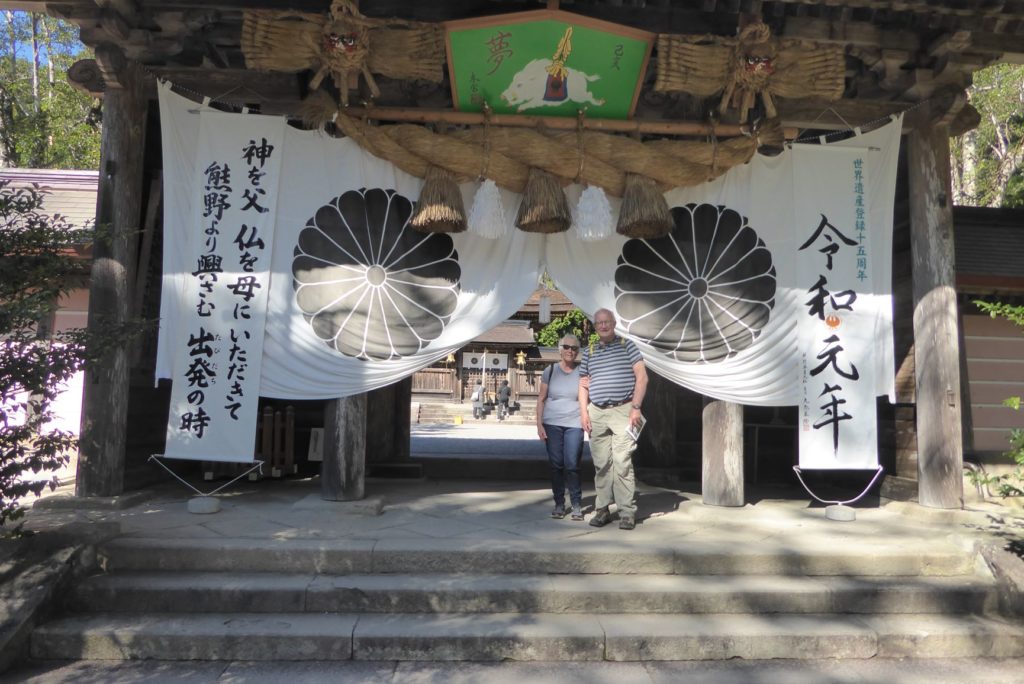 Afterwards we bussed to our inn in Yunomine Onsen. The ryokan (traditional Japanese inn) we were staying in was established in the seventeenth century. Soon after arriving we took a bath. We tried the couple’s bath, but it was obviously made for slender Japanese folk so off we went off to bathe in the inn’s communal onsen which was divided into a male and female section.

Afterwards we were served dinner in our tatami covered room at a low table. In a separate area they had provided a couple of European style chairs, probably because they have a number of non-Japanese guests here. As we are not great floor sitters, we were grateful to have somewhere to sit on for the rest of the evening and to catch up on our emails from home.

The following morning, we were served a full Japanese style breakfast in our room which included steamed rice, tofu, grilled fish, miso soup, pickles and various side dishes. It was decoratively served on individual trays in mismatched little pottery dishes and bowls, a feast for the eyes.

After a lazy start we travelled from Yunomine Onsen to the start of the Kumano river boat tour. The two of us were joined by about 14 Israelis who were on a guided tour of Japan.

We hopped into two small traditional wooden flat-bottomed boats for a two-hour river journey to view sacred waterfalls, another part of the Kumano Kodo pilgrimage route. The early travellers would not have had the benefit of an outboard motor, but it was still a great feeling travelling down both smooth water and rapids, with only water birds for company. 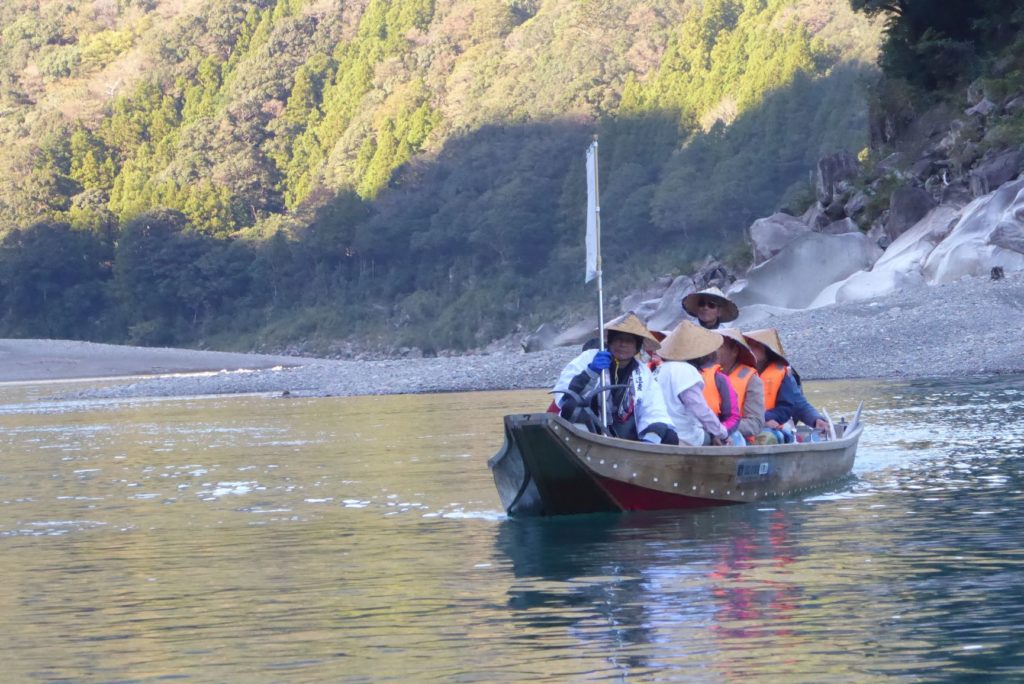 Our Japanese boatman was also our tour guide and he told us many stories about the landscape and the many sacred waterfalls we passed. He pointed out how Tatami Rock looks like a pile of tatami mats leaning to the right and how Tsurigane Rock looks like a bell.  It is said that when this overhanging rock falls the world will come to an end.

In some places the gods had left their marks on the landscape. Hiru island was a place where they liked to lunch and play board games If you stand on the island you can still see crisscrossing lines which make up what appears to be a game board.

When we arrived at Shingu at the river mouth, we made a quick visit to the shrine, and then made our way through the town to the bus station for a 30-minute trip to our hotel on an island at KiiKatsuura which proved to be rather spectacular.

Here we were served the most memorable dinner we had on our journey, a traditional kaiseki dinner designed by the head chef. There were nine small courses, each very artistically presented using fresh local ingredients. It included such foods as a cooked sweet potato shaped like a maple leaf, stone-baked Kumano beef, pickled matsutake mushrooms and prawns, various kinds of sliced raw fish, and assorted tempura. The other guests were all Japanese but for us they had printed out the menu, a treasured souvenir.

We spent the night in futons on the tatami mats. We did ask for softer pillows here as the provided ones seemed to be stuffed with a coarse material, probably straw. Apart from the pillows the hotel was great, and we had a quick walk through the forest adjacent to the hotel the next morning.

After breakfast we took a short bus ride to the bottom of the Daimonzaka slope to walk up to the Nachi shrine and also the highest waterfall in Japan. The slope turned out to be a long series of uneven cobble-stone stairs (numbering 2-300 but it seemed further!) As we were struggling to make our way up some elderly Japanese gentleman called out Ka Mate Ka Mate urging us on and to be strong. How strange to hear words from the All Black’s haka used in this way! But it was worth the effort to view the old wooden shrine buildings, one of which dated back to the seventeenth century.

Then we traipsed down to the waterfall. More uneven steps. Which were not too good for our aged knees! But we got there. After that, it was back in the train to our Osaka hotel, before venturing by Shinkansen train to Kurashiki. 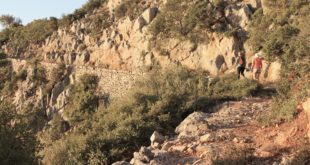 Adventurous Travel with a Unique and Affordable Club

Travelling without a buddy is entirely do-able, and many find it a rewarding experience, but ...