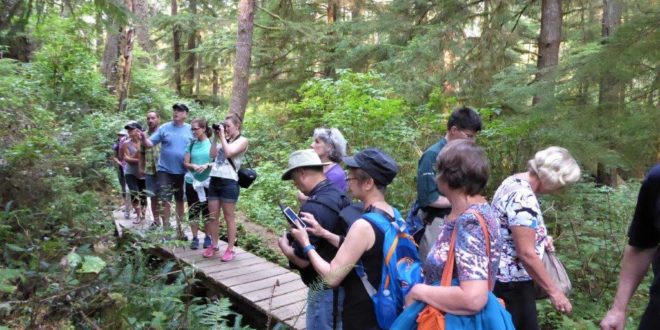 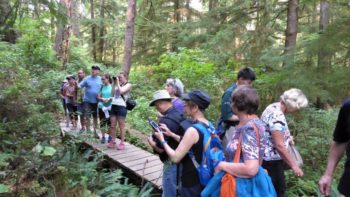 On our last day in Ucluelet, we drove to Schooner Grove in Vancouver Islands Pacific Rim National Park to meet up with Carl a park ranger again for another free Interpretive Rainforest Walk.

Did you feel the earthquake this morning he asked? It was a 3.2 but we had slept right through it. After a cautionary tale about what we should do in the unlikely event of a tsunami, we set off.

The Schooner Grove Trail is a 2km boardwalk through the rainforest and over streams.

By Canadian standards it is narrow and there are lots of steps but our pace was slow and we found it easy.

The sun shining through the haze caused by the wildfires cast an unusual soft orange light over the trees.

Carl showed us how to differentiate the three main species here (Red Cedar, Sitka Spruce and Western Hemlock) by their leaves and bark and pointed out some very old trees as well as new growth. 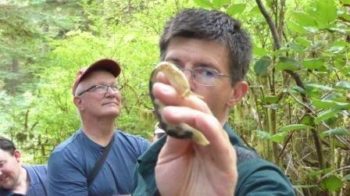 He talked us through how each finds its place to grow and the interdependence of all the life in the forest. Trees that had been blown over by storms or eaten by lichen lay on the forest floor and had turned into ‘nurse trees’ providing moisture and nutrients for saplings. In some places, there were three layers of trees growing on top of each other.

We stopped to smell the scent of the forest and to discover mushrooms and slugs.

‘No licking,’ cautioned Carl as these slugs can numb your tongue, cause swelling and block your air passage. As if we would want to!

As we got closer to the beach Spruce which is resistant to salty sea breezes became more dominant.

At the end of the walk a vast sandy ocean beach stretched out before us and we had a seaside wander before finding our own way back,

We’re always after a café where good coffee is to be had! So on the way back to Ucluelet, we stopped off at the Huckleberry Bakery and Coffee Roaster. It has a friendly vibe, the kind of place where the locals meet up for a good chat. The food was healthy and hearty.

Someone had written on Trip Advisor that here:

“The blueberry cinnamon buns can feed a family of lumberjacks for a whole winter!” 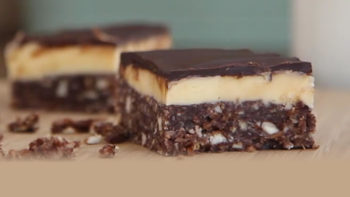 But along with a cappuccino and a toasted sandwich, I was after a Nainoma Bar. This iconic Vancouver Island “raw” treat has a biscuity bottom, followed by a thick layer of custard flavoured butter icing and topped with melted chocolate.

So sweet and filling I could only finish half of it so they kindly provided me with a doggy bag to take the rest away to eat later.

The following day we set off for Victoria, the capital of BC. It was a pretty drive through the hills with lake and forest views. But the skies were still hazy from the wildfires.

Our first stop was at Cathedral Grove. It was hard to find a park as this rare and endangered remnant of an ancient Douglas fir ecosystem is very popular. 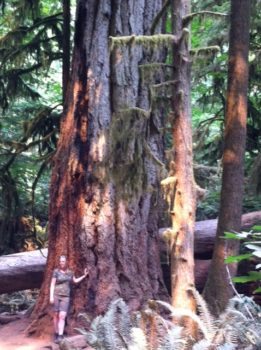 As we took a short stroll we were awed by these ancient giants of the forest, some about 800 years old. The largest one measures more than 9m (30 ft.) in circumference.  Sadly such trees are now rare as commercial logging has taken a huge toll over the years.

We made one more stop at Coombs. Early in the 20th century a handful of poor English and Welsh immigrants had been settled here as part of the Salvation Army’s immigration programme and called it after the Salvation Army’s Canadian Commissioner Captain Thomas Coombs. He would be astounded if he could see it now.

Coombs is a crowded touristy shopping mall in the middle of nowhere. It’s famous for the family of goats grazing on the grass rooftop of the Old Country Market. We gazed up hopefully but the goats had gone AWOL that day.

There is a courtyard full of huge Chinese statues alongside a vast Asian Emporium. The streets are lined with plenty of small shops with cheap clothing and souvenirs and artist studios. We lunched in the indoor market and then made our escape from this rather bizarre place, 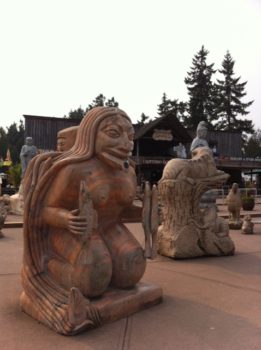 The remainder of the journey along the highway went quickly and once in Victoria we had no problem finding Menzies Manor, our apartment, in an old residential neighbourhood. It was comfortable and within walking distance to the city centre.

In the late afternoon, we drove up to the Thrifty Supermarket which was just up the road As we got out of the car we noticed a pale orange sun in the sky. The smoke pollution was still heavy but it was forecast to clear by the following day.

We bought a healthy take-away Caesar Salad for dinner. Later that evening it felt good to be able to stretch our legs by walking along the waterfront which was only a couple of blocks away.

Previous Article Once upon an island: Escape to Rottnest
Next Article Video: San Francisco travel guide – must see attractions 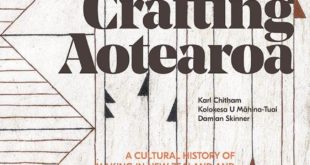