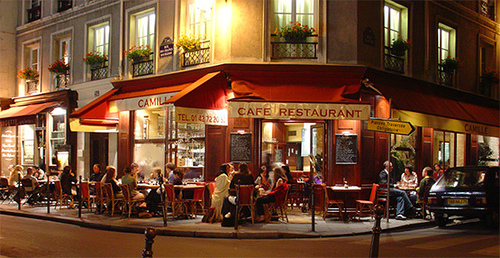 Twenty five years ago we had brought two of our children to Paris. This time we were child free and we feel in love with Paris all over again: its splendid old buildings, the magnificent art, the lilting sound of the French language and the food. The pastries and macaroons are to die for! 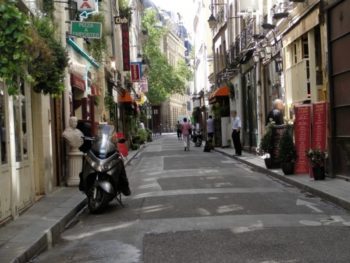 We arrived on the Eurostar on Election Day and then hopped on the metro to reach our apartment. I was feeling somewhat nervous as the city was on high alert and I imagined there could be a few rumbles. But we had no hassles at all and saw just a few armed police standing around.

Our apartment was in an old building in the historical St Germaine des Pres area, about 4 mins walk from the Metro and with handy supermarkets and restaurants. But it was on the sixth floor.

Fortunately there was a tiny lift which, when fitting both of us in, was a tight squeeze. I soon christened it ‘The Romantic Lift’ (as you do in Paris). The apartment  belonged to an art teacher. It was very cosy and filled with artworks and books. She was there to greet us and to show us around. Her very limited English was better than our almost non- existent French

Her final instruction was “You may drink my whisky but not my wine!

Paris can be very expensive. But John is a canny tourist and had done his homework. So on our first day there we bought a weekly Passe Navigo which covers all forms of transport in Central Paris and went sight-seeing on the #69 bus which stops at many of the tourist attractions and is much cheaper than the special tourist bus. 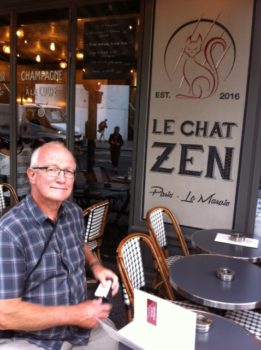 As most of the museums are closed on Mondays, we headed for the Pere Lachais cemetery with many outrageously ornate tombs set in parklike surroundings.  You can pay homage to Oscar Wilde, Edith Piaf and Jim Morrison who are buried here.

On the way home we stopped off at Notre Dame Cathedral. The queues were very long .We had seen it before (25 years ago) and as it has been standing for 700+ years we doubted if much had changed. So instead we paid a visit to the Shakespeare bookshop and a couple of ancient churches before slowly making our way back to Rue Bonaparte and home.

That night we found a small local restaurant which was established in 1901. It was charming and inexpensive. John dined on onion soup with stringy cheese and beef bourguignon while I had a fish and vegetable cassoulet swimming in cream of which Julia Child would have approved. No room for dessert! 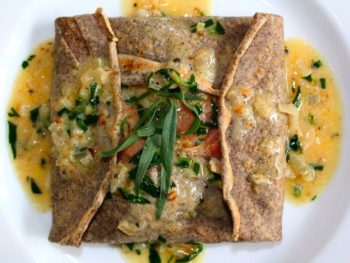 After a leisurely start to the day we went to the Conciergerie which has led a double life as a Royal Residence but also as a revolutionary tribunal and prison during the French revolution. Its most famous prisoner Marie –Antoinette was imprisoned and executed here.  I found it ghoulishly fascinating! Alongside was the beautiful Saint Chapelle church with 15 stunning stained glass windows, each 15 metres high,

But the highlight of our day was having lunch at The Bistro de Paris, a very old Paris restaurant frequented mainly by locals which serves traditional French food. The atmosphere was relaxed but formal. The waiters wore waistcoats and black ties. A friend of ours who is a chef in New Zealand had said we must go and that it was not too expensive. It proved to be good advice. We happily lingered over a leisurely lunch and a bottle of wine.

That evening we went to a piano concert in a very old church within walking distance. Unlike my partner who is very musical I am known for nodding off during classical concerts. But I heard most of it. 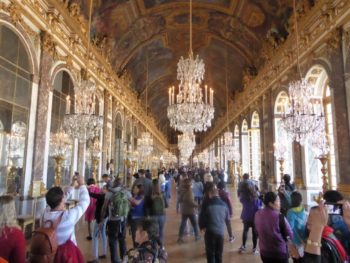 We took a day trip to Versailles. Although we arrived early with our museum passes we still had to line up to go through a security check. With many other tourists we walked slowly through the palace admiring its pomp and splendour. Shortly after our visit, Macron, the newly elected French Prime Minister, thought it the perfect place to entertain President Putin at a State dinner.

The extensive formally laid out gardens surrounding the castle with its statues, fountains and marble vases provided us with an opportunity for a long and scenic ramble.

Afterwards we found a little creperie in a nearby street and had a decadent lunch. After a savoury galette (buckwheat pancake) filled with sausage and stringy cheese we managed to squeeze in another topped with a scoop of ice-cream and covered in chocolate sauce. The local cider we downed alongside was a rather strongly flavoured local brew.

Amply satisfied and re-energised we carried on and used our metro and bus passes to get up close to the Eiffel tower. 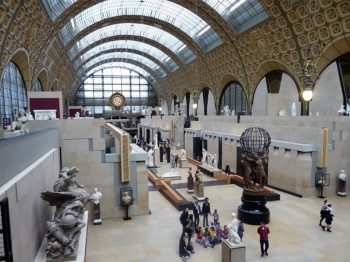 Museum Day! Armed with our museum passes we visited the

Musee D’Orsay. A grand 19th Century railway station may sound like an unusual place to house a very large collection of Impressionist and Post-Impressionist Art but it works beautifully. When you see so many paintings which you have only seen as reproductions in art books it is such a joy to see them in real life!

The Picasso Museum was my favourite. Some of the larger Paris Art Galleries and Museums can be overwhelming so this smaller and more intimate museum was a real treat.  It was a unique opportunity to find out more about Picasso the Man. There were snippets and videos about his life, and many of his own paintings  which he had kept for himself and also those of others artists he admired and had acquired during his lifetime.

Then it was back on public transport again to La Defense to view the Grande Arche, a 20th century version of the Arc de Triomphe, which is located in a purpose built modern business district. Call me old fashioned if you like but I much prefer the soaring original (which was commissioned by Napoleon in 1806) to this stark gigantic hollow cube.

There was a great outdoor market nearby to have lunch with funky wooden furniture to sit on and all sorts of cheeses, wines, salami fruit and vegetables and sweet treat to choose from. The hottest sweet treats in Paris right now are macaroons and the three I bought here (chocolate, coffee and raspberry flavoured) were the best! 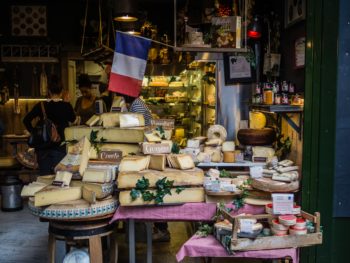 We went on yet another church visit to Saint Sulpice, a Baroque Catholic church (the second the largest church in Paris) and admired the beautiful Delacroix murals. It wasn’t until after we returned home that I discovered that this church had played a significant role in the Da Vinci Code.

The Marche des Enfants Rouges (the oldest covered food market in Paris) sounded amazing in our guide book but we weren’t that impressed. I had more fun checking out the large flea market on the street outside and fossicking around the second hand books, crockery, clothes and many other small treasures on sale. On the way back we passed yet another Parisian patisserie with an irresistible window display. We bought an apricot, pistachio and pear pastry, large enough to share between us.

One of the favourite tourist haunts in Paris is the Marais, with its narrow cobblestoned streets. It was once the Jewish quarter but is now filled with trendy cafes and galleries. Here we each had an espresso in a tiny cup in a Gay Bar. Despite their small size they packed a big punch. 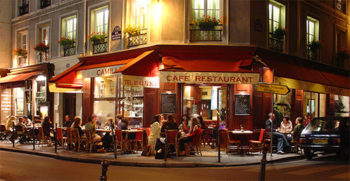 Back in St Germaine des Pres for dinner that evening we sat down in a little bistro for our last dinner in Paris.

There was live South American music, loud but not exactly tuneful, and good food. We had fun people watching. There was an ongoing mutual flirtation between the young waiter and a group of students who were probably from the nearby Ecole Des Beaux Artes and were thoroughly enjoying their evening out.

It felt a little sad to be leaving Paris so soon. It had more than lived up to our expectations! But the following morning we would be continuing our European journey and board a train to Leipzig.

Read the first part of Lyn’s trip, stopping over in London.