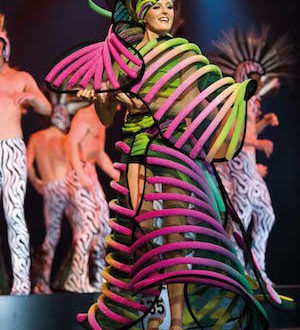 For a Christmas present a good book is hard to beat. This year we are again spoilt for choice with many new non-fiction books by New Zealand authors arriving on the market.

My pick is Susan Holmes: Fashion Artist.  My partner John, who is a wine buff, has chosen New Zealand Wine: The Land, The Vines, The People to review. 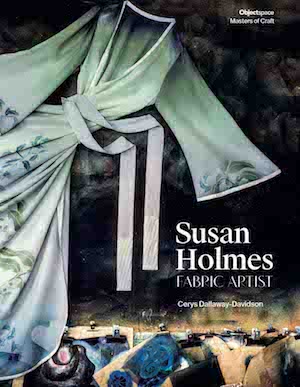 Susan Holmes is the highly talented designer who currently holds the record for winning the most WOW (World of Wearable Art) awards. Her amazing “Dragon Fish” costume won the Supreme Award. This remarkable woman is75 years old and is still going strong.

In Susan Holmes: Fabric Artist Cerys Dallaway-Davidson has written the story of her life and achievements in a very engaging way .The book also contains many stunning photographs of Susan’s work taken  by her ex-husband Phil Fogle with whom she still shares a professional relationship.

It was produced to accompany an exhibition at Objectspace in Ponsonby Rd which features Susan’s WOW creations but also some of the garments she produced in earlier decades. This is a wonderful exhibition (on from 19th November 2016-4th February 2017.) I have already made a date with my granddaughters to view it again.

At her artist talk there on a Saturday afternoon, in her inimitable self-deprecating and witty way, Susan talked us through when and why she had made each one.

She always started with the fabric, felt it, looked at it and draped it to see how it behaved.

She then explained the astounding variety of techniques she had applied: block printing, stencilling, spraying, dyeing and fabric manipulation. 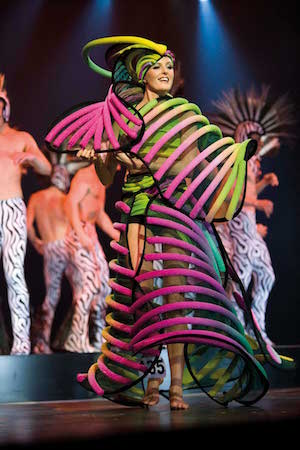 The world was a different place when she started her journey. There was no Internet so you couldn’t Google to instantly learn a new technique. Susan had to teach herself and achieved the desired result by experimenting.

She also loved to look at magazines like Vogue to check out the latest fashions.

“I aimed to copy them,” she said. “But as I am the world’s worst copier, they turned into Susan Holmes originals.”

Although her WOW creations look like a million dollars she is a frugal person who often uses found, recycled, and gifted materials and hunts out bargains.

If you were around in the seventies you may have been among the large crowds which gathered at Brown’s Mill (a craft co-operative in Auckland’s Durham Lane) each weekend. This is where I first saw her dresses which at that time had a hippie aesthetic. I fell in love with them but couldn’t afford to buy. Susan did not keep any for herself either as she needed the money.  In the exhibition at Objectspace are several garments from this era which have been lovingly cared for and are still in pristine condition

Her clothes were wildly popular. But eventually there was a downturn in the economy, fashions changed and she needed a new direction. She found it through entering and gaining success in competitions like the Benson and Hedges Fashion Design Awards and WOW. These have provided her with the opportunity to fully develop her creative talent and taken her to new heights.

Susan Holmes: Fashion Artist is a special book to give to anyone who is interested in fabric, fashion and art. And it will appeal especially to those who have seen some of her amazing creations on the WOW stage. 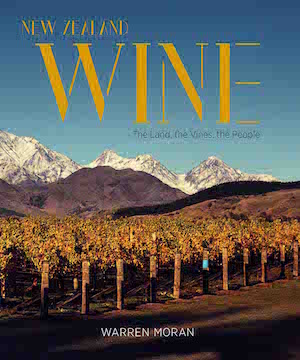 This is a very handsome book. It describes the history of New Zealand wine; the climate, geology and terroir of the major grape-growing regions of New Zealand; and the history and wines of some of our major wine producers. It operates as a beautiful coffee-table type book, with plenty of illustrations, maps and photographs, while at the same time has plenty of thoughtful and well written passages about our grape growing and our wine to keep the wine enthusiast happy.

Warren Moran is an Auckland University Geography Emeritus Professor and has been writing on wine since his post-graduate thesis in 1958, so is very well acquainted with his subject. He was intimately associated with many of the pioneers of the New Zealand wine scene, and has kept in touch with the new developments that have occurred since the turn of the century. He has a special interest in the geology of the various wine regions, and even the individual parts of those regions, and conveys them to the reader in a very readable form. He is able to interpret the science of wine production, and make it readily understandable to the reader.

The book does not supply an exhaustive list of the hundreds of wine producers in New Zealand, but instead concentrates on the main players in the various wine regions. While this could be a disadvantage for individual readers trying to find a wine they might like, the book is better for this. It is not designed to promote any individual wine producers but rather the New Zealand wine industry as a whole. It certainly does this, and fully explains why our wine industry is held in high regard in other parts of the world, through the mix of climate, terroir and the skill of the individual wine makes.

I would recommend this book to all that have a love of wine. It is a book that both acts as a basic scholarly reference to the New Zealand wine scene, but also as a very attractive book to have around the house.