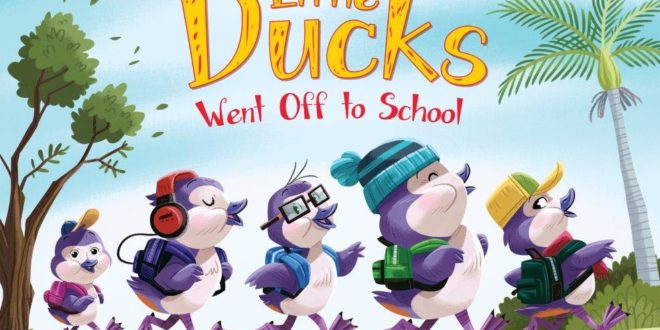 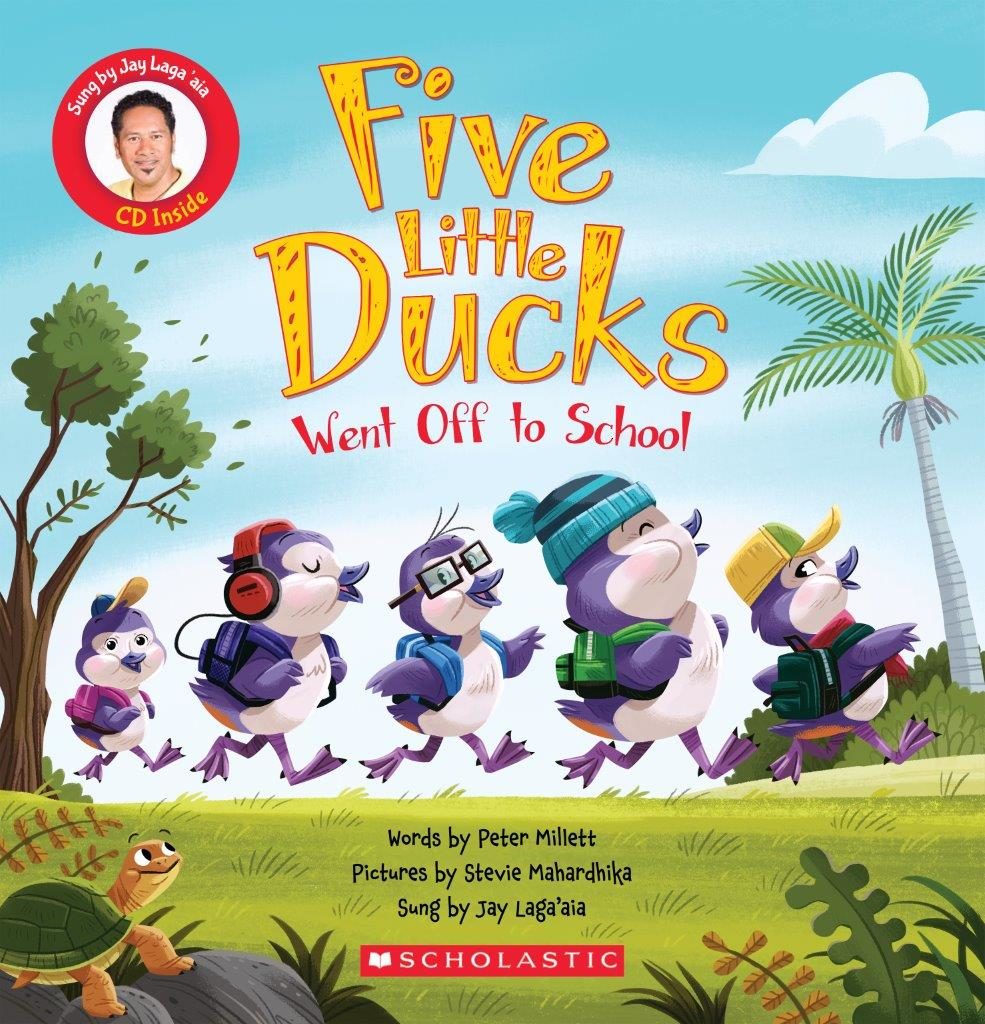 If you have a little person in your life who is nearly old enough to go to school or one who has recently started Five Little Ducks Went Off to School would be just right for them.

As you turn the pages put on the accompanying CD and listen to the happy school time song together. Soon they will know it off by heart and sing merrily along. It is such a catchy tune I caught myself humming it in the shower.

The story starts with Mother Duck fondly waving goodbye to her five little ducklings as they head off to school over the splishy-splashy pool.

“Five Little ducks went off to school. One little duck with a schoolbag on her back, she led the others with a quack, quack, quack! “go the words. Does it sound familiar? That’s because it is based on the familiar rhyme “Five Little Ducks”

The ducklings have not swum very far when one little duck has to hurry scurry back because he forgot his lunch.

When they reach the paddock on the other side the second little duck realises he forgot his cap and rushes back home as well.

And so the story goes on. Each of the other little ducks has also left something behind, a drink bottle, a pair of boots and a book and must return home to retrieve them.

Time is running out. Their teacher is standing in front of a cute little country school house ringing her hand bell to let them know school is about to start. Will any or all of the ducklings be late?

Turtle makes it in time, for although being a slowcoach he was wise enough not to forget anything.

But the frog they met on the way merrily dancing on a rock waving a book is nowhere to be seen. Did he decide to wag?

This short little tale is by well-known children’s author Peter Millett. He spent time being a househusband in charge of getting his children to school each day. Often something like a drink bottle or stationary got left behind in the rush to get them to school in time so Peter would have to go back and fetch them.

Jay Laga’aia, well known for his part in Australian Playschool and who has starred in many TV shows, musicals and movies composed the music and sings the song. He and his wife have raised eight children so he too knows how easy it is to leave something behind.

There is lots of little child appeal in this book. The brightly coloured comicky illustrations by Stevie Mahardhika will draw them in. And they will enjoy the rhythm and rhymes and the Quack Quack Quack refrain.

There is some good vocabulary in there as well as the landscape changes from the splashy splashy pool, to swoggy boggy grass, and a swampy muddy bay.

Learning to be school ready includes being organised and making sure that you have everything you need before you leave home. And this book will help new entrants to do just that.

Five Little Ducks went off to school is by Peter Millett, illustrated by Stevie Mahardhika, sung by Jay Laga’aia. Published by Scholastic. Paperback plus CD RRP $19.99