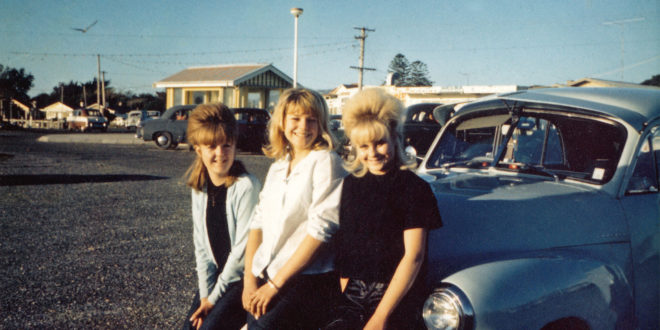 With the first national commemoration of the New Zealand wars coming up I thought GrownUps might like to take a peek into some history this week. I especially loved Gavin’s book, quirky and funny but serious as well. 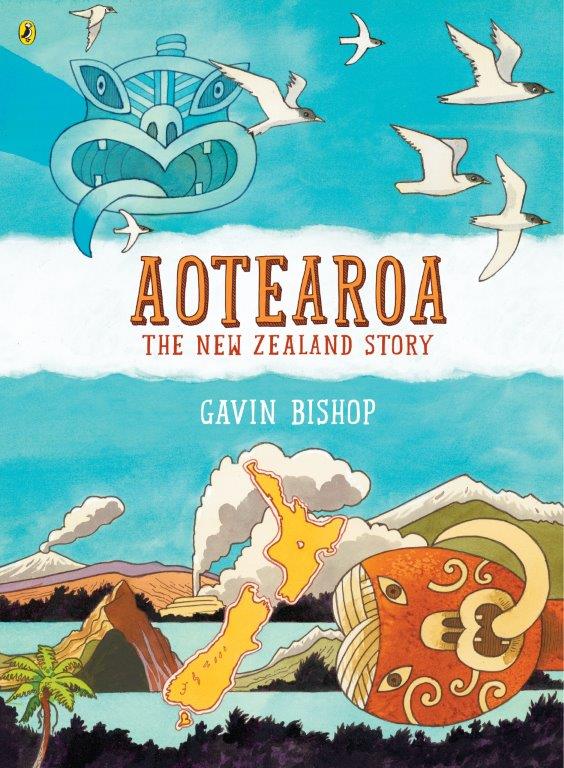 Over a thousand years ago, the wind, sea currents and stars brought people to the islands that became known as Aotearoa, the land of the long white cloud.

Aotearoa: The New Zealand Story, a picture book by Gavin Bishop is about those who arrived here in waka over many generations. And it is also about those who followed much later from many different parts of the world and now call Aotearoa home.

He dedicated it to his mokopuna, made it quirky and amusing for them but also packed it full of interesting and important facts.

It is not just a chronological account. There are plenty of stops along the way where he has created double-page spreads to explore topics like housing, transport, fashion, food and famous people in more detail. Each of these would be a great starting point for some interesting conversations with your grandchildren.

In Houses, he drew pictures of the kinds of houses New Zealanders have lived in through the centuries from a raupo sleeping hut to a Californian bungalow and grand architecturally designed houses. He brought this part of our history right up to the present time by showing people living in garages after the Christchurch earthquake and homeless people sleeping in the street.

In Food, there are pictures of our iconic foods, but also those introduced by our many immigrants. Healthy new foods like amaranth, bliss balls and green smoothies are included.

In Clothes Gavin personalises history by including members of his own family, Gavin himself stands beside his Grandma. His Uncle makes an appearance dressed for the races. His wife is shown wearing an Indian dress that she bought in London. And his Mum and Dad are there on their honeymoon.

In Aotearoa sport is like a religion says, Gavin. For Sports, he picked Lydia Ko, Jonah Lomu and Richie McCaw but also included Millie Khan who won 12 national titles in lawn bowls.

Aotearoa: The New Zealand Story would a great resource for upper primary school children upwards. Not younger I think as Gavin deals with some challenging times like the wars New Zealanders have participated in, and the Depression.

But like all the best picture books adults would enjoy it as well especially older people who have lived through some of these times.

In the final section, he cautions us to take care of our environment and asks us to imagine how tomorrow’s world could look. A thought-provoking finish!

Teenagers: The Rise of Youth Culture in New Zealand 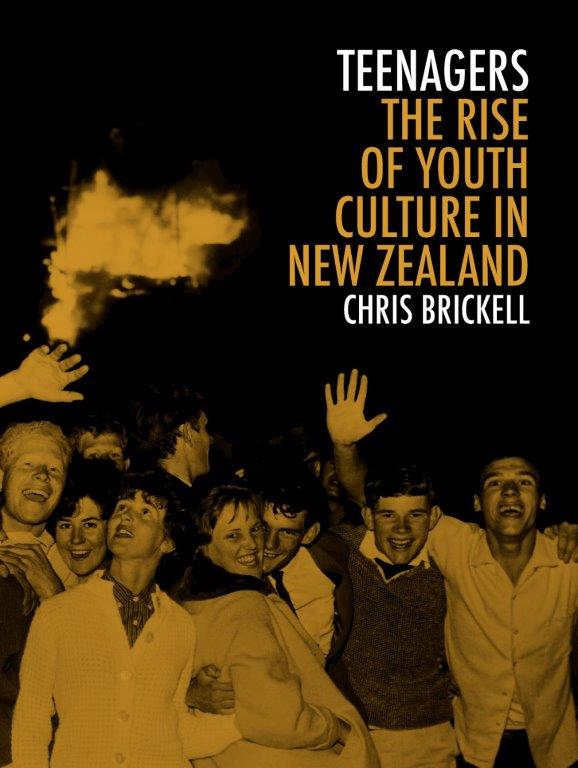 This is the first history ever written about New Zealand teenagers from colonial times to the eighties.

Historians have almost invariably seen teenagers through the eyes of the adults who criticised them for their ‘juvenile delinquency”, alcohol, sex and boisterousness in general”

But Chris Brickell wanted to let teenagers speak for themselves so throughout this book there are fascinating excerpts from their diaries and letters. He cast his net widely and includes the voices of Maori as well as Pakeha teens, gay teens, deeply religious teens, and those who spent time in borstals.

It is a serious and lengthy read but is well written. What I enjoyed most, however, were the many photographs in this book. That brought back the memories, especially of the fashions and hairdos!

I was a teenager (along with Ray Columbus) in the late fifties and early sixties so the chapter about that era Milk Bar Cowboys and Rock’N’Roll was of special interest, 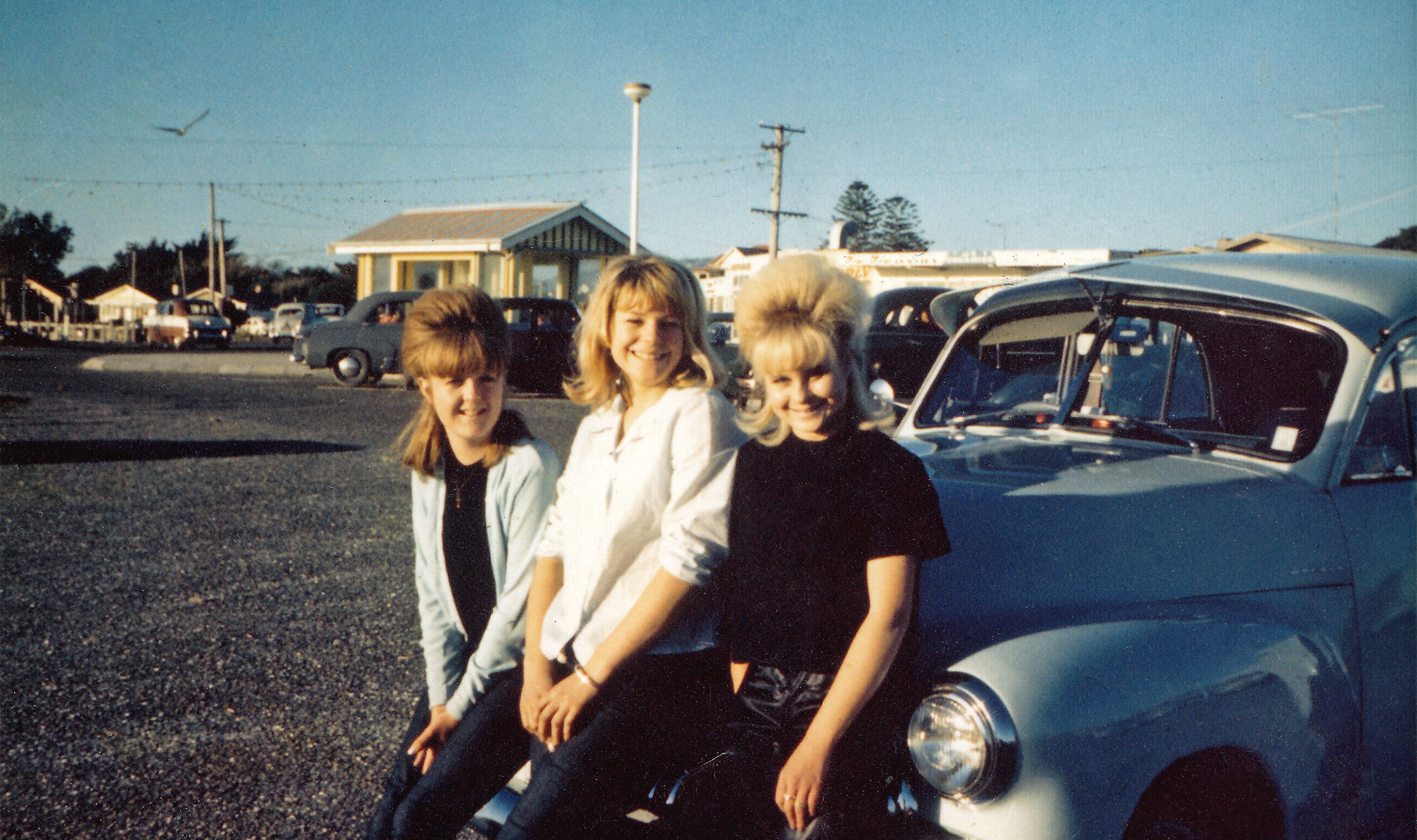 I never realised that we were the first generation to go to a co-educational high school.

At that time, writes Chris Brickell, conservative submission writers to the Mazengarb Report (a committee set up by the National Government to look into teenage depravity) wrote that boys and girls in co-ed settings were liable to lose control and rush headlong into moral depravity.

But truth be told my school friends and I weren’t very rebellious or immoral. We had homework to do after school.  In the summer we might go swimming in the Hutt River where we never worried about pollution as the water was clean.

We did love Elvis and rock’n’roll but were more focussed on passing School Certificate and University Entrance so we could go on to University. It was affordable as there were no student fees in those days. 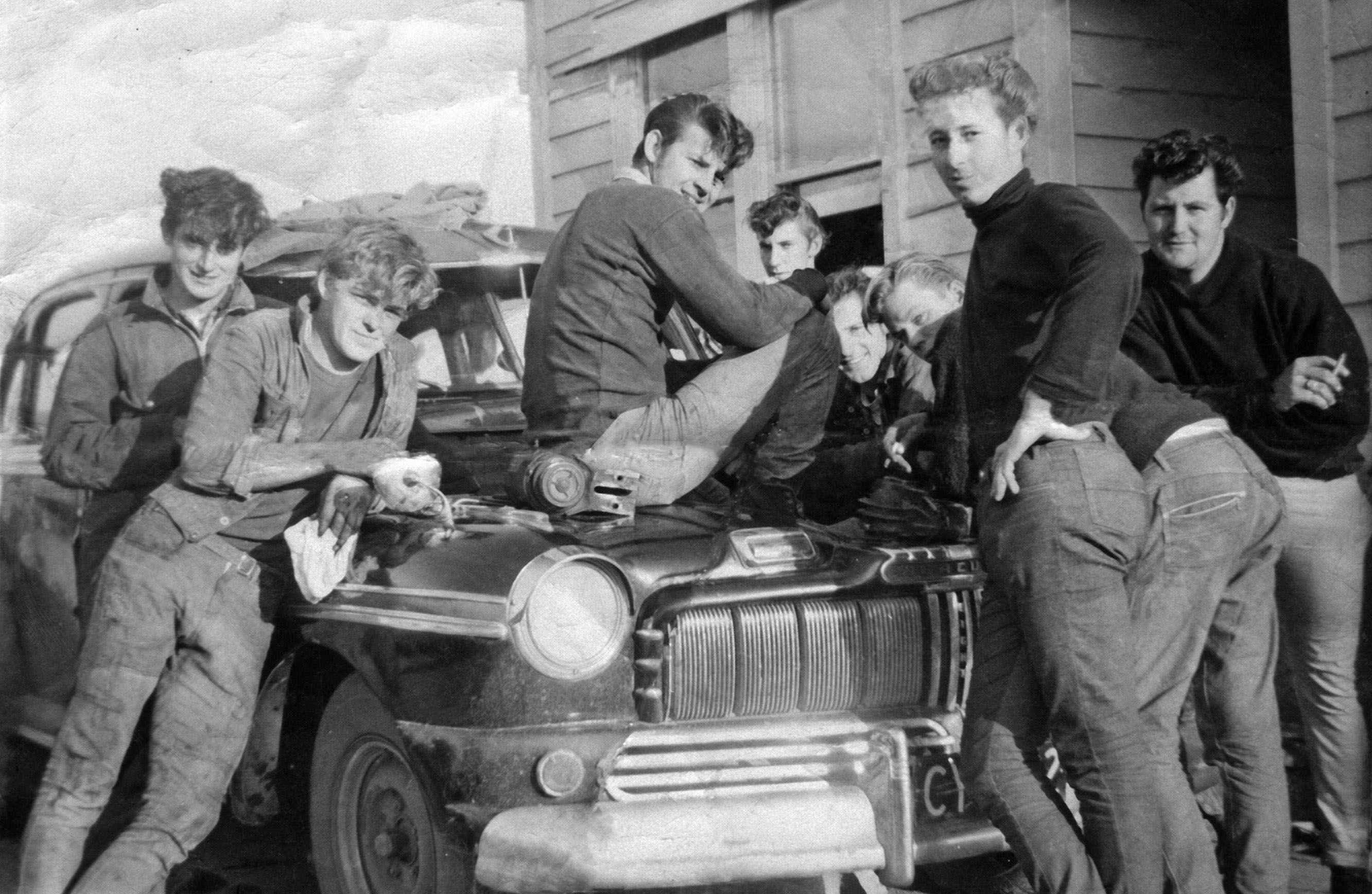 After that, there was bound to be a job as it was a time of virtually full employment. We were a very fortunate generation.

It wasn’t until we went to University and went flatting that we spread our wings,

But I guess everyone who was young at that time will have their own version of what life was like as a teenager and which stories they might like to share with their grandchildren.

A Short History of the New Zealand Wars 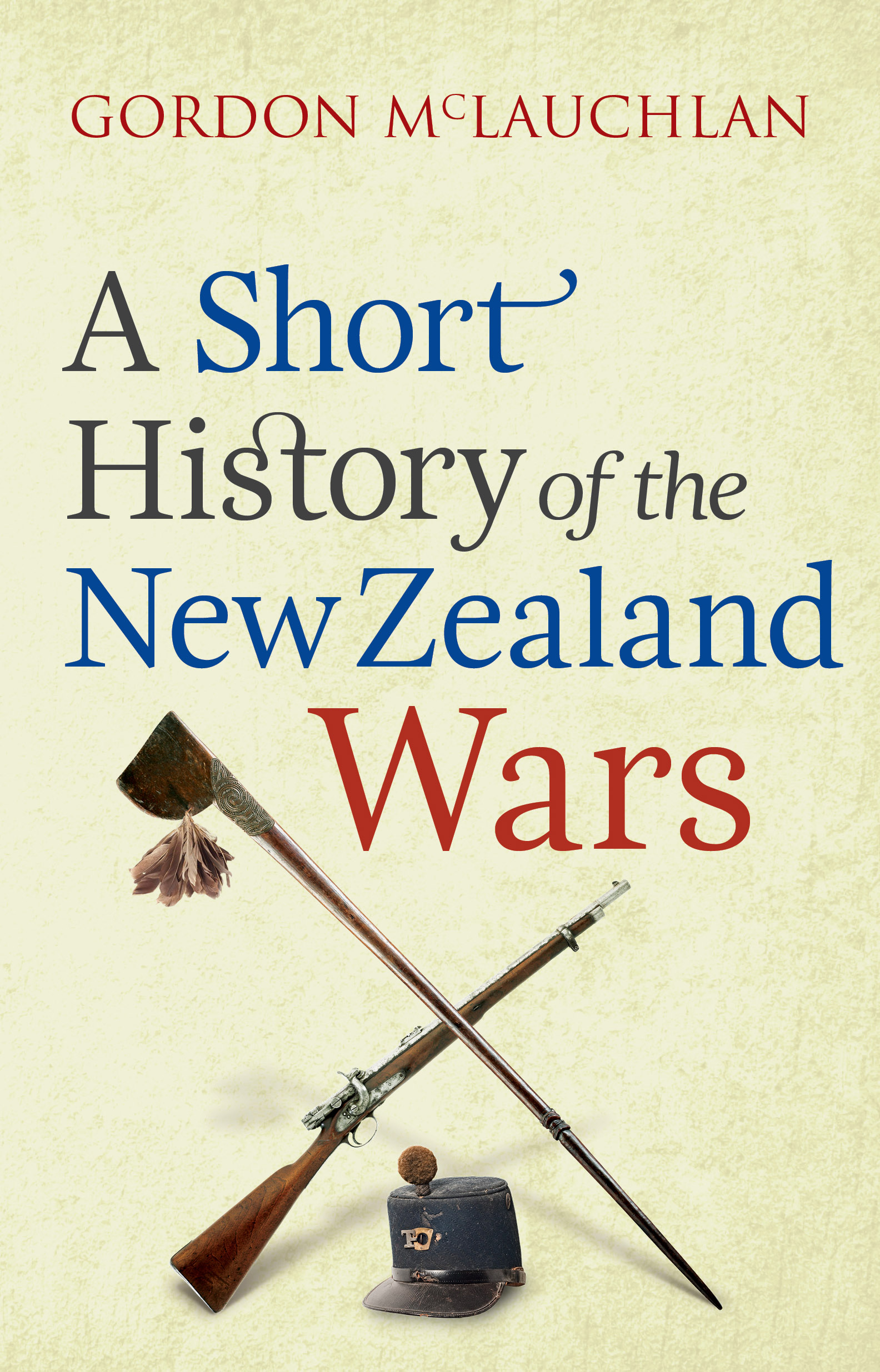 I read Gordon McLaughlan’s The Passionless People in the seventies.   Among other things, he called New Zealanders smiling zombies – basically decent, but smug and complacent. It was certainly a book that made us sit up and take notice!

So I expected him to have some strong opinions about The New Zealand Wars. But in this short history, he adopts a more moderate voice and aims to give a balanced account of the skirmishes and wars which happened after the Treaty had been signed in different parts of New Zealand. The story that emerges is one in which the Government of the day allowed the settlers’ hunger for land to override the rights of Maori to retain it.

The conflict and its consequences had a profound effect on our race relations And although there are processes in place by means of the Waitangi Tribunal to restore the relationship between Maori and the crown there is much more to be done until justice is truly achieved and we achieve a fairer society.

While on a school trip in their local area Leah Bell and Waimarama Anderson, two students from Otorohanga College, were shocked to discover what had taken place so close to home during the New Zealand Wars.

They felt that a National Day of Commemoration was called for and with the help of their schoolmates collected 12000 signatures for a petition which was presented to Parliament on December 2015. The government agreed that such a commemoration should happen and that it would be-be an annual event (but not a public holiday).

We spend so much time and effort remembering those New Zealanders who lost their lives in wars overseas that it only seems fair that we also set aside one day a year to remember what happened here during the New Zealand Wars and to take the time to learn from and reflect on our past.

War books are not my usual genre but McLaughlan is a good storyteller and I found his book easy to read. Generations of school children, including ours, were never taught about this dark period in our history. If you also missed out learning about the New Zealand Wars at school you may like to read it.