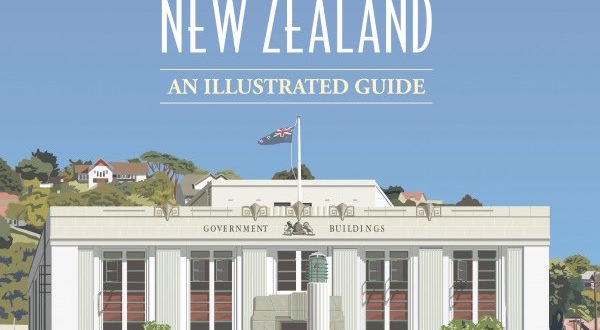 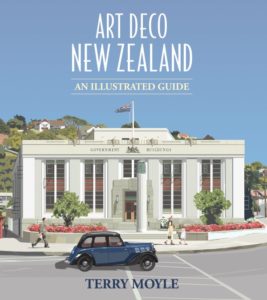 Art Deco New Zealand: An Illustrated Guide is a celebration of our Art Deco built heritage. After reading it you may well be inspired to embark on your own Art Deco road trip.

The large numbers of Art Deco buildings in small town New Zealand, from as far North as Kaitaia to Invercargill in Southland surprised him. Some were in unexpected places, for example, a heavily Moderne-style garage in the settlement of Ruatoria and a dramatic two-storey cinema in the far north town of Kawakawa.

“These buildings are not exactly opera houses in the Amazon jungle but they brought the modern and a sense of the new world and New Zealand’s place in that world to the smallest country town” writes Moyle.

After many of Napier’s central city buildings were reduced to rubble during the disastrous 1931 Hawkes Bay earthquake, a decision was made to rebuild the town centre in Art Deco Style. This was viewed as a celebration of progress and modernity.

But various styles of Art Deco, which were popular from the 1920s on, can also be found in many other towns and cities of New Zealand. In some towns there may be only one significant Art Deco commercial building, in others there are clusters.

One of the most appealing parts of this book is the more than 50 beautifully coloured illustrations of Art Deco buildings which have been demolished or modified. These sit along the many historic and contemporary photographs

Terry Moyle has written a very readable overview of how the economic and political climate of the day influenced Art Deco’s popularity and adoption. A pivotal role was played by the newly elected Labour Government who instigated a large public works programme to ease unemployment and boost the economy at the time of the depression in the 1930’s. At that time many Art Deco Post Offices were built and grants were given to build picture theatres.

Whether there was a distinctive New Zealand Art Deco style is debateable. The closest New Zealand came to it was in the stripped Art Deco Classical Post Offices and other public buildings that provided government services in the 1930’s.

Art Deco Māori motifs were infrequently incorporated. They were used on both the exterior and interior of the BNZ in Napier, and the Police Stations in Rotorua and Palmerston North.  Koruru heads were strikingly worked into the stripped classical design of the Chief Post Office in Whanganui.

Since reading Art Deco New Zealand: An illustrated Guide I have found myself looking out for Art Deco buildings and houses in our local area, and have become aware of many that I had previously missed. Art Deco spotting can soon become an addictive pastime when exploring your own back yard!

Not far from us two solidly built Art Deco houses, standing side by side, will shortly be demolished to make way for a high rise apartment building. It is sad that in the name of ‘progress’ they will soon be reduced to rubble.

The book provides an illustrated map pinpointing all the buildings shown within it, which would be useful for anyone wishing to set off on an Art Deco road trip. It would have been convenient to also have a more detailed explanation and small illustrations of the various kinds of Art Deco building styles to refer to, But all in all this is a special book that will whet your appetite for Art Deco .

Previous Article Salt & pepper salmon with mango salsa
Next Article Which Craft Is Right For You?