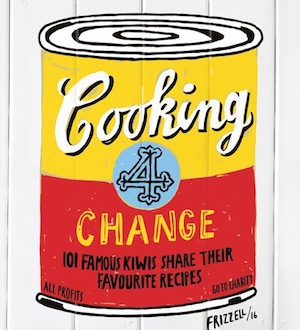 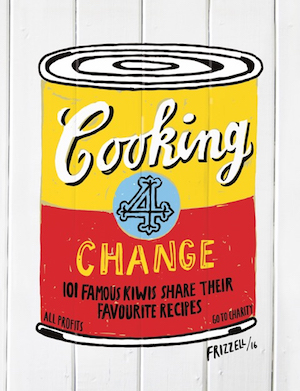 Cooking 4 Change is a great read. So curl up in your armchair and enjoy this large collection of culinary anecdotes and recipes shared by 101 famous kiwis. Then head into the kitchen and try your hand at some. You won’t regret it. There are too many to mention but here are a few of our favourites:

Peter and Lucy Elliott make ‘Bloody Good Fish Cakes.’ Exceptional with snapper they say but any fish will do. Serve with hot chips, a green salad, tartar or sweet chilli sauce and a squeeze of lemon.

For comfort food you can’t beat Anika Moa’s Mac and Cheese, her nana’s version. Mustard is the (now not so) secret ingredient.

Stan Walker contributed his Mum’s large Tuna and Silverbeet pie. He even likes it cold straight out of the fridge five days later.

Helen Clark is a caring daughter who fills up her 94 year old Dad’s freezer when she comes home for a visit with enough ready to heat and eat meat meals to last him for several months. Not cordon bleu but homely dinners like a traditional beef casserole. Her Dad still grows his own vegetables.

From Hilary Barry comes a recipe for one of my favourite cakes, a hummingbird cake, spicy and full of crushed pineapple, banana and coconut. She got it out of a cookbook she stole from her Mum ages ago. ‘When she sees this recipe she’ll want it back!’ bemoans Hilary.

Tom Abercrombie wooed his wife to be with a decadent and delicious silky chocolate tart.on Valentine’s day. It got the desired result. They are now married and have a baby.

Moses from Sol3 Mio wrote down one of Samoa’s most loved recipes: Pani Popo, yeast raised buns swathed in a creamy coconut sauce. He would have loved to have given his family’s recipe for pineapple pie but decided against it when he heard  that Oscar Knightley was supplying his auntie’s best version.

Jono’s favourite recipe is his own creation: Jono’s French Toast. No-one else in his family likes it but he thinks everyone should give it a go to see how much they dislike it as well.  I foolishly did and it was indeed tasteless and soggy. I could just imagine Jono grinning all over his face and shouting ‘Ha Ha I told you so!

I had more luck with Sam Neill’s Shepherd’s Pie.  His Mum was a terrible cook who was more interested in being outside with the horses. He thinks the kitchen was her idea of hell! But Sam himself likes to cook, grows his own vegetables, keeps it fresh and always uses local produce.

‘Makes all the difference I tell ya!’ he says.

There are some endearing confessions. Kimberley Crossman admits that she is better at eating than cooking but before heading off to America she made sure she knew how to make one iconic and incredibly easy kiwi recipe: lolly cake. As anyone who has tasted it will attest it is very moorish and kids especially love it.

These famous New Zealanders are just like us when they are in their kitchens and this makes this cookbook so appealing. No aspiring MasterChefs here but lots of achievable family friendly recipes cooked from the heart. And they have generously donated their recipes for a good cause.

Cooking 4 Change is a charity cookbook and the brainchild of artist Dick Frizzell, his business partner Christian Kasper and TV presenter Erin Simpson.

All of the publisher’s profits from the sale of Cooking 4 Change will be distributed evenly between Paw Justice, Leukaemia and Blood Cancer New Zealand, the Starship Foundation and Auckland City Mission

Previous Article Who Am I?
Next Article Cruisin’ Together 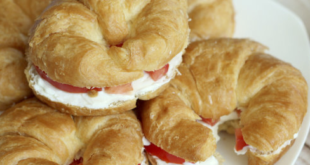