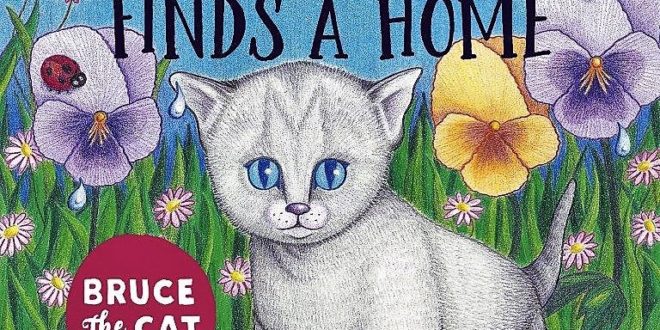 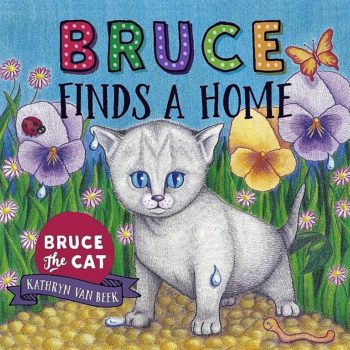 Bruce was just a little ball of fur hardly bigger than a rat when Kathryn van Beek discovered him lying by the roadside. His umbilical cord was still attached. No-one in the neighbourhood claimed him so she nurtured him back to health and blogged about his progress. Bruce went viral. Now he has his own Facebook Page with thousands of followers.

Bruce Finds a Home is loosely based on this true story. A little girl called Kate finds a tiny kitten and goes from house to house trying to find his owner and asking what she should call him. He doesn’t belong to any of them and none of the names they suggest really suit him.

This heart-warming little tale has colourful illustrations of some of the interesting characters that live in her street including a tattooed lady artist and a jovial and rather rotund clergyman.

I especially like the fact that Katy is not a princess, or gifted with superpowers.  She is an ordinary little girl with a kind heart who other children will be able to identify with.

If you love cats you’ll find this one an irresistible picture book to read to your grandchildren.

Diary of a Wimpy Kid: The Getaway 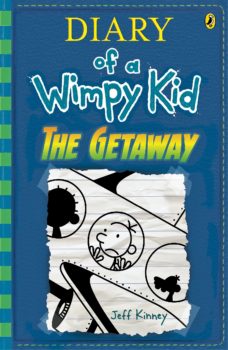 Greg, the Wimpy kid does not want to go on a family holiday to a resort called Isla de Corales where his Mum and Dad had their honeymoon. But there is no getting out of it.

The holiday gets off to a bad start. After a lot of shenanigans at the airport they almost miss their plane but due to bad weather, it has been delayed so they catch it after all.

The Wimpy kid does not enjoy the flight (and not just because of the turbulence) After a while he decides that sitting on the toilet in the economy section is a hundred times better than being stuck in his seat so he decides to stay put and whenever another passenger needs to use it he just makes bathroom noises until they go away.

When the family eventually arrives at the resort his Dad discovers he has accidentally grabbed the wrong suitcase from the baggage claim at the airport. So they have to survive in the clothes they arrived in apart from a few items from their carry-on luggage.

The resort is not the paradise they had hoped it would be. Sunburn, stomach troubles, venomous critters and some outrageous behaviour all threatens to ruin the family’s vacation (and that of the other holidaymakers as well)

Will it all turn to custard or can Mum’s dream of having the perfect holiday shot (of all of them smiling) to put on the family Christmas card still be accomplished?

Diary of a Wimpy Kid: The Getaway is aimed at 9-11 year old boys (Even those who don’t like reading much are bound to appreciate the comicky illustrations, very short chapters, and wacky humour.)

There have been a few complaints from parents who feel that the Wimpy kid’s outrageously bad behaviour sets a poor standard and could encourage their children to get up to similar mischief. But I think that’s highly unlikely! What do you think?

Diary of a Wimpy Kid: The Getaway: by Jeff Kinney. Imprint Puffin. RRP $17.99

Do You Want to Gallop with Me? 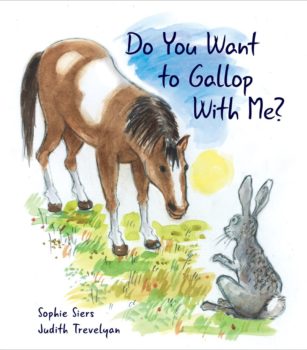 Pony loves to gallop across paddocks, splash in the river, trot along the track and prance through the grass. He’d love his friends to join in. When hare, hedgehog, and tui all decline his invitation it looks as if he’ll have to play by himself.

But his luck is about to change when a little girl who loves horses comes running towards him.

And I think Do You Want to Gallop with Me would make a perfect bedtime story as it is brief, the plot is simple and it flows gently in a rhythmical way. On the last page the pony, the rabbit and the hedgehog are all fast asleep. Time to say goodnight!

Do You Want to Gallop with Me? by Sophie Siers is published by Millwood Press. RRP $20

Previous Article Covi motorhome caravan & outdoor supershow – on this weekend!
Next Article ‘Guinness Down Under’ – win a copy!