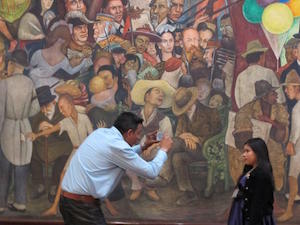 The New York Times chose Mexico City as their top destination for 2016. The reason?

“This sprawling vibrant metropolis has it all, from restaurants to museums to shopping and there’s no place on earth just like it.”

It is also the taco capital of the world. So, after our holiday in Cuba, we decided to spend a few days there. We stayed at The Hampton Inn and Suites, a 300 year old 3 star hotel in the historic centre. A staircase with a wrought iron hand rail circles up 6 stories to a stained glass ceiling. Being slothful we rode up in the classy glass elevator.

Our rooms were clean and comfortable and the friendly staff spoke some English. The only downside, there was a certain amount of street noise.

As soon as we had unpacked we wandered down to the Zocalo, the main square and the heart of the city. The weather was hot and sticky and the footpath teeming with masses of people .There was a constant raucous chorus of police whistles. A policeman was directing traffic on every street corner and there were more in between. Another distinctive sound was street organ music. After Cuba’s laidback atmosphere it felt rather overwhelming.

The Zocalo is really impressive. It was once the centre of the Aztec Capital Tenochtitlan. Now it is lined with majestic colonial buildings and pre-Hispanic ruins and is one of the largest city squares in the world. To our slight consternation the police were out there in full riot gear every morning. But the atmosphere remained relaxed.

“They just like to show who is in charge of the city,” we were told at our hotel. 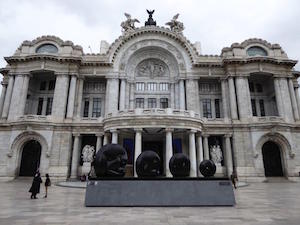 On one side of the Zocalo stands the monumental Metropolitan cathedral, a grand old building. It is the oldest and largest catholic cathedral in Latin America and is full of colonial art. Next door is the smaller and less ostentatious 18th Century Sagrario Metropolitan, the city’s main parish church. We preferred it as it was more serene and less crowded and also with some beautiful art. On the Sunday we were there families were standing outside in the sunshine waiting to go to mass, their little daughters exquisitely dressed in white lacy dresses.

Strangely the Sagrario Metropolitan leans one way and the Metropolitan Cathedral the other way. They are not the only ones. A lot of lot of the buildings in Mexico City are slightly off balance as the city was built on an unstable lake bed. It is sinking faster than Venice, more than 9 metres in the last 100 years.

Shortly after we arrived I began to feel a bit seedy and nauseous, possibly due to altitude sickness so we decided not to travel too far from the historic centre and to give two of Mexico City’s most famous tourist attractions, the Frida Kahlo House and the ancient pyramids of Teotihuacan, a miss. There were many other attractions, gracious buildings, museums and markets, within walking distance.

Some of the highlights for us were:

It wasn’t until the 1970’s that the remains of this huge Aztec temple were discovered by some workmen in the historical centre. It must have been an amazing find right in the heart of the city.

We followed a walkway through the temple ruins and learnt about its religious symbolism and different construction phases.

Not to be missed was the Temple Mayor museum where many of the artefacts dug up during the excavation were on display, a really good introduction to pre-Columbian Tenochtitlan culture.

In this stately building we were awed by the huge series of murals painted by Diego Rivera (Frida Kahlo’s husband), the father of modern political mural art. Diego Rivera traced the history of Mexico from its legendary pre-Hispanic past to modern times ending with the hope for a better future.

The Museum of Anthropology

We spent a whole day (and could have spent more) in this large contemporary building with its vast treasure trove of pre-Hispanic Mexican artefacts, relics of   gruesome, cruel and violent times with many human sacrifices. I was rather relieved to find that the second floor was dedicated to the gentle domestic arts like weaving. And there was a great café in the courtyard outside.

To get to the museum we had caught the hop on hop off bus which was fine on the way there. But the bus journey back took forever as the roads were so clogged with traffic that we moved at a snail’s pace. From the top of the two decker bus we watched a large and vocal street demonstration. 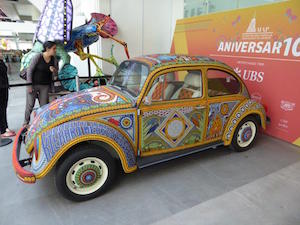 Sunday was a good day to visit as the entrance was free. Inside was a wonderful colourful and whimsical collection of folk arts and crafts from many different Mexican states including alebrijes (fantasy creatures, masks and Day of the Dead decorations) They were accompanied by videos to show how these objects are used in dance dramas and in festivals. In the courtyard, as well as huge colourful kites suspended from the ceiling, stood a VW car entirely covered in Huichoi beads.

A children’s workshop was in progress and in a small gallery space we met a young artist who had cleverly created a fascinating exhibition of miniature creatures, so tiny you needed a magnifying glass to view each detail .Our granddaughters would have loved it! 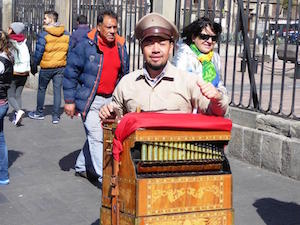 One afternoon Cindi and I walked to a large indoor market with many quality local crafts on display. It was the best place to buy our souvenirs. The following day I walked to a book market on my own. Although the journey back should have been straight forward, having no sense of direction, I still managed to get lost. With a bit of help from two young nuns and a policeman to whom I showed my hotel card, I managed to get back to the hotel without having been kidnapped, scammed or otherwise harassed for money. Although I was a woman on my own, I felt reasonably safe. However I was well aware that it pays to keep your eyes open and to be distrustful of strangers. Even policemen may not be your friends in Mexico City which has a high street crime rate.

Towards the end of our stay I’d recovered my appetite. We went to a little restaurant on the top floor of a department store close to our hotel. The wait staff spoke no English, we spoke no Spanish and we weren’t too sure what we were ordering. We all had a good laugh.

The dinners were fine but what I loved most were the basket of freshly cooked and still warm corn tortillas and the salsa verde (a Mexican tomatillo salsa) which accompanied the meal.

We feel so fortunate to have had a chance to visit Mexico City. It may be polluted, congested and sinking but it is also a vibrant and fascinating place and truly an art lovers dream!