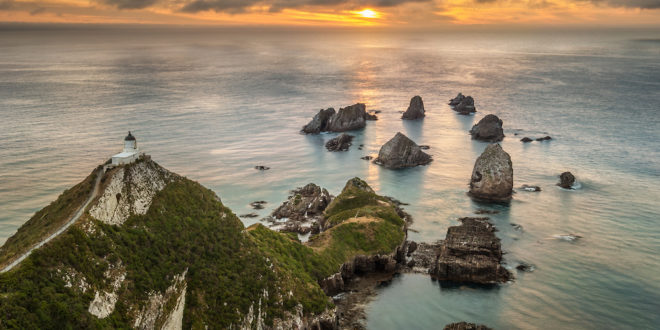 All too soon our time in Dunedin comes to an end and we are off south heading for the Catlins.

This is an area of New Zealand most will never have heard of. A pity as the scenery is sensational.

A left turn at Balclutha for a special road trip that will end in Invercargill It is the type of road that is best travelled at 80 kph. True, that may annoy many other drivers but if you pull over regularly they can get on their way while you get to soak up the countryside at your own pace. 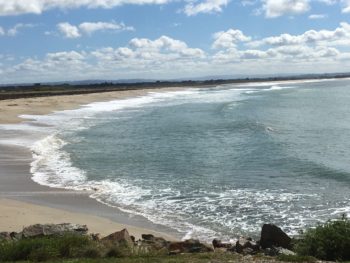 1st stop is Kaka Point that overlooks a sweeping bay with the mouth of the Clutha at the northern-most end. A strong undertow threatens attempts to wade in the shallows. Mind you the 11 degree temperature limits the time allocated to that activity. B-r-r-r-r!!!

On to Nugget Point where a 1 km walk gets us to the lighthouse that overlooks an interesting line-up of islands which look like they’ve been tipped on their side due to the vertical grain of sediment on each structure. Viewed from a height of around 400 feet the seals and sea lions look small as they bask in the sun and swim in aqua green water. Their cries and yelps drift up the hill towards us reminding me they have their territory well mapped out.

The photos I am taking will never do justice to what I am seeing. The horizon is so broad and the scenery so breath-taking, you need to be here to appreciate it.

On now to our destination for the day at the Catlins Holiday Motor Camp. This is one of many available and I fully endorse taking the time to stop at at least one of them to delay your departure from this magical area.

As it transpires our stop is only 3 kilometres from the track leading down to the Cathedral Caves. For $5 per head we get to track down a man-made path to the beach through beautiful native bush. I must confess the trek down appeared to go on and on – all downhill. My first thought is “I have to walk back up this!” 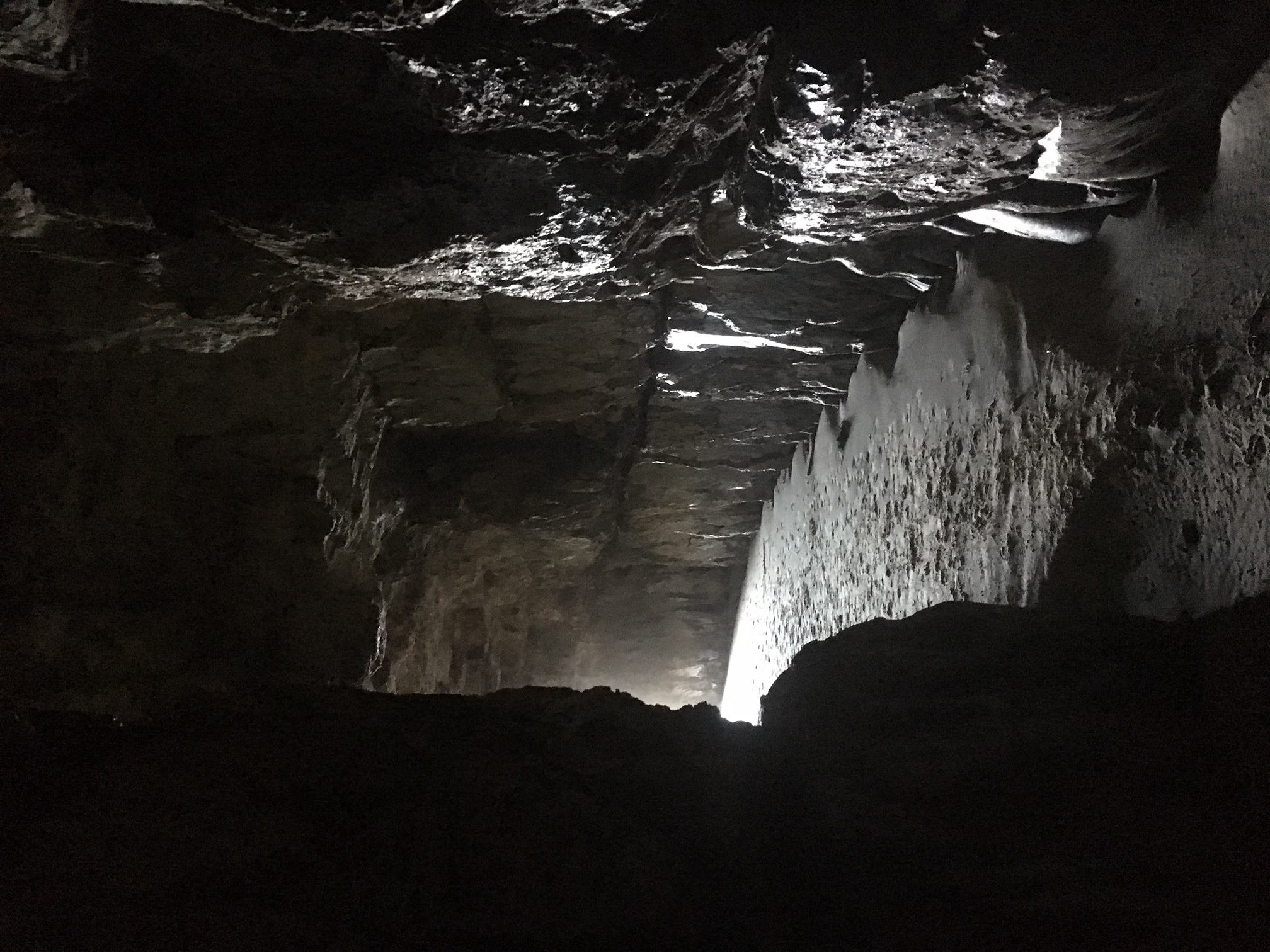 Well the long walk down and across the beach an hour before low tide is more than worth it. These caves are awesome. Carved out thousands of years ago they are one of the largest sea caves in the world. They go back into the cliff 200 metres and I am able to walk to the back. Nothing grows in there as the tide when it as its peak would rush through the channel obliterating everything. No wonder sightseers are limited to 2 hours either side of low tide.

After the exuberance of these awe inspiring natural structures the walk back up the hill isn’t as onerous as I feared. It certainly works up a thirst.

Back to our accommodation for a sumptuous meal and an end to another great day seeing a magnificent part of this Island.

Day 4 dawned a beautiful crisp clear day. 3 degrees! B-r-r-r! At least it’s better than Auckland where it appears we have missed the 100 mm dump of rain.

We are fortunate our Motor camp is on the road to McLean Falls. 3 kilometres up a gravel road followed by a 20 minute walk through dense native bush and we arrive at a beautiful sight nestled in the thick bush, of water tumbling down rocks into a pool and continuing down the valley. The bush here is magnificent with trees intertwined with moss and lichen. It is damp and around 4 degrees cooler that at the car park. The bush is full of native birds including the Kiriru native pigeon, Tui’s, bellbirds and much more. At times the sound of their cries are deafening they were so prolific. A bird watchers paradise.

Back on the road heading for our next destination, Curio Bay to view the Petrified Forest down at the shoreline. At first glance it looks just like a mass of rocks being constantly washed by the relentless tide. Long strands of kelp at the edge of the rocks are a distraction. However a walk down onto the rocks reveals the preserved remains of trees from the Jurassic period set in amongst the rocks. It becomes more and more obvious seeing the long trunks laying embedded in the rocks. 180 million years ago the trees were ‘preserved’ by the impregnation of silica from the ash which rained down on them from surrounding volcanoes. This site is recognised worldwide as the best example of plant life from that period thanks to the manner of its preservation. Whilst there are so many examples of the plants embedded in the rocks it hasn’t stopped collectors chipping out samples to take home of a unique piece of Jurassic history. Very annoying but dare I say typical of the ‘it’s only me…’ attitude that pervades. 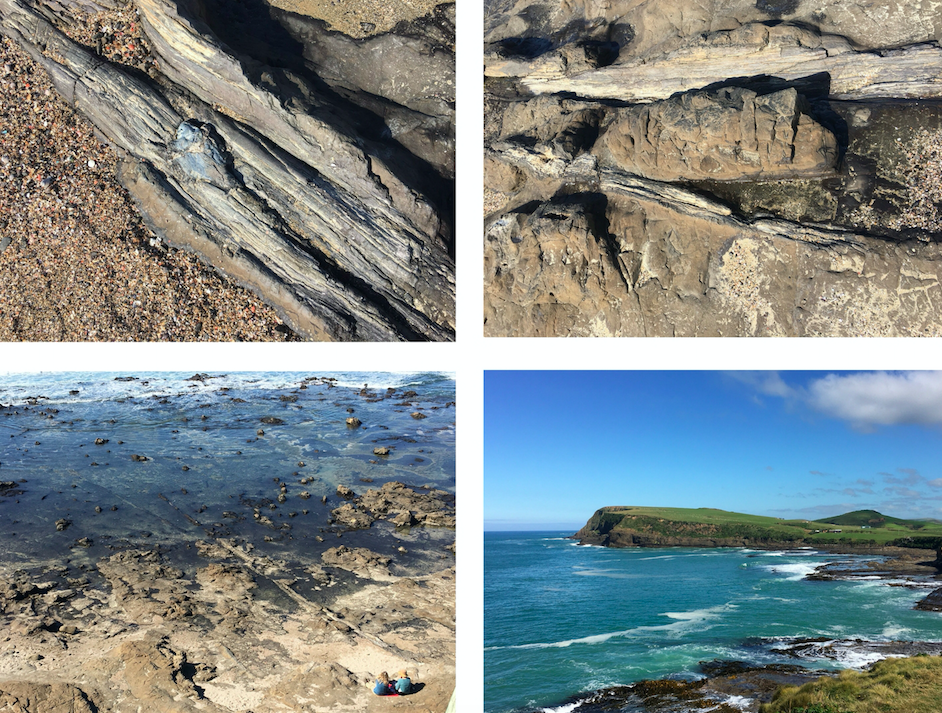 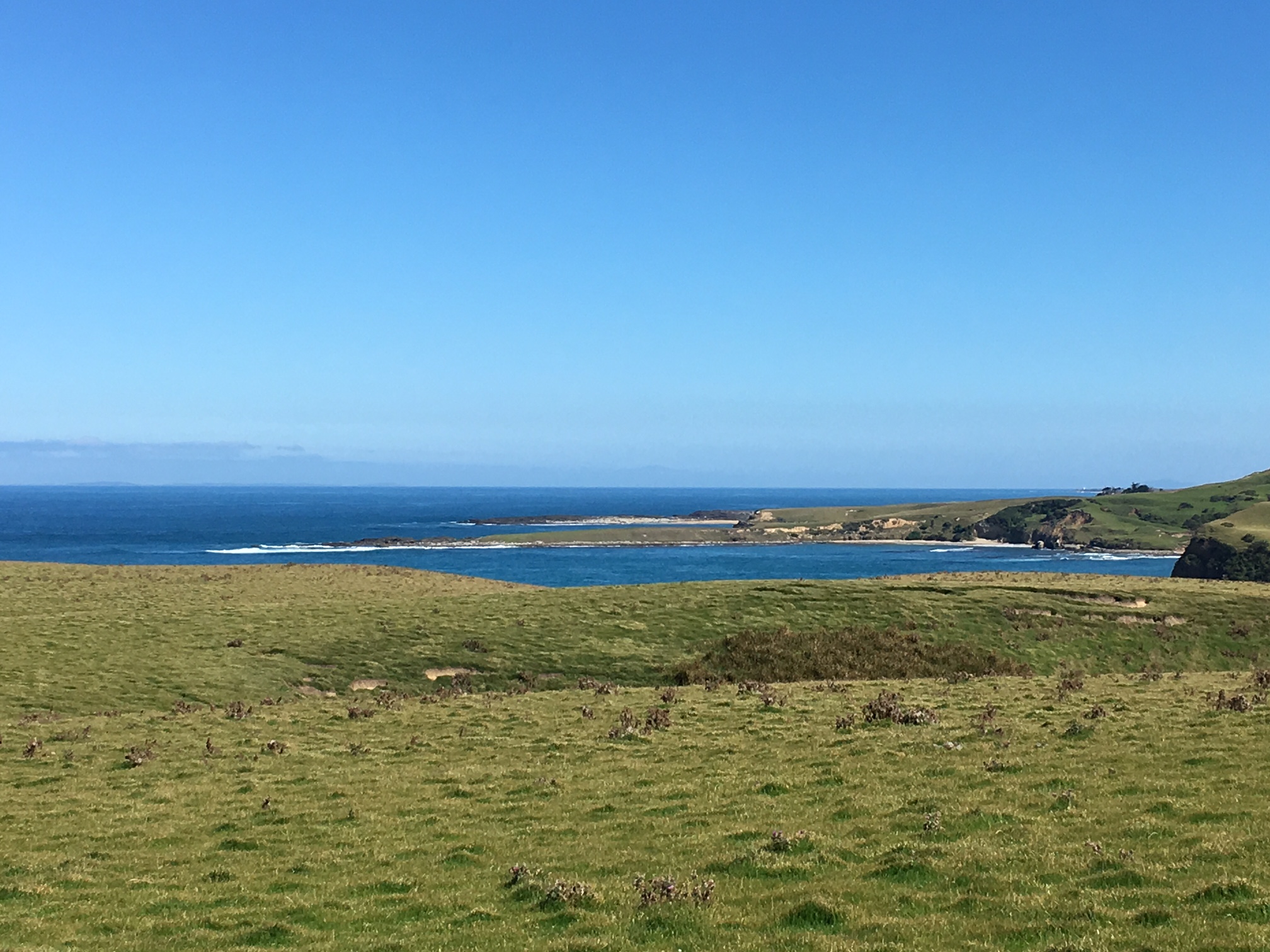 After absorbing the atmosphere of Curio Bay it is off to Slope Point to stand on the southern -most part of the South Island. Amazingly it is only halfway between the equator and the South Pole. The shoreline is bare as the Southern Ocean smashes into this part of the coast with relentless ferocity. Luckily today it is calm and we are blessed with the fine day continuing as it started. What is amusing though and an indication of the power of the southern storms, is the long grasses angled flat on the ground all facing away from the direction of the powerful winds whipping over the edge of the cliffs. 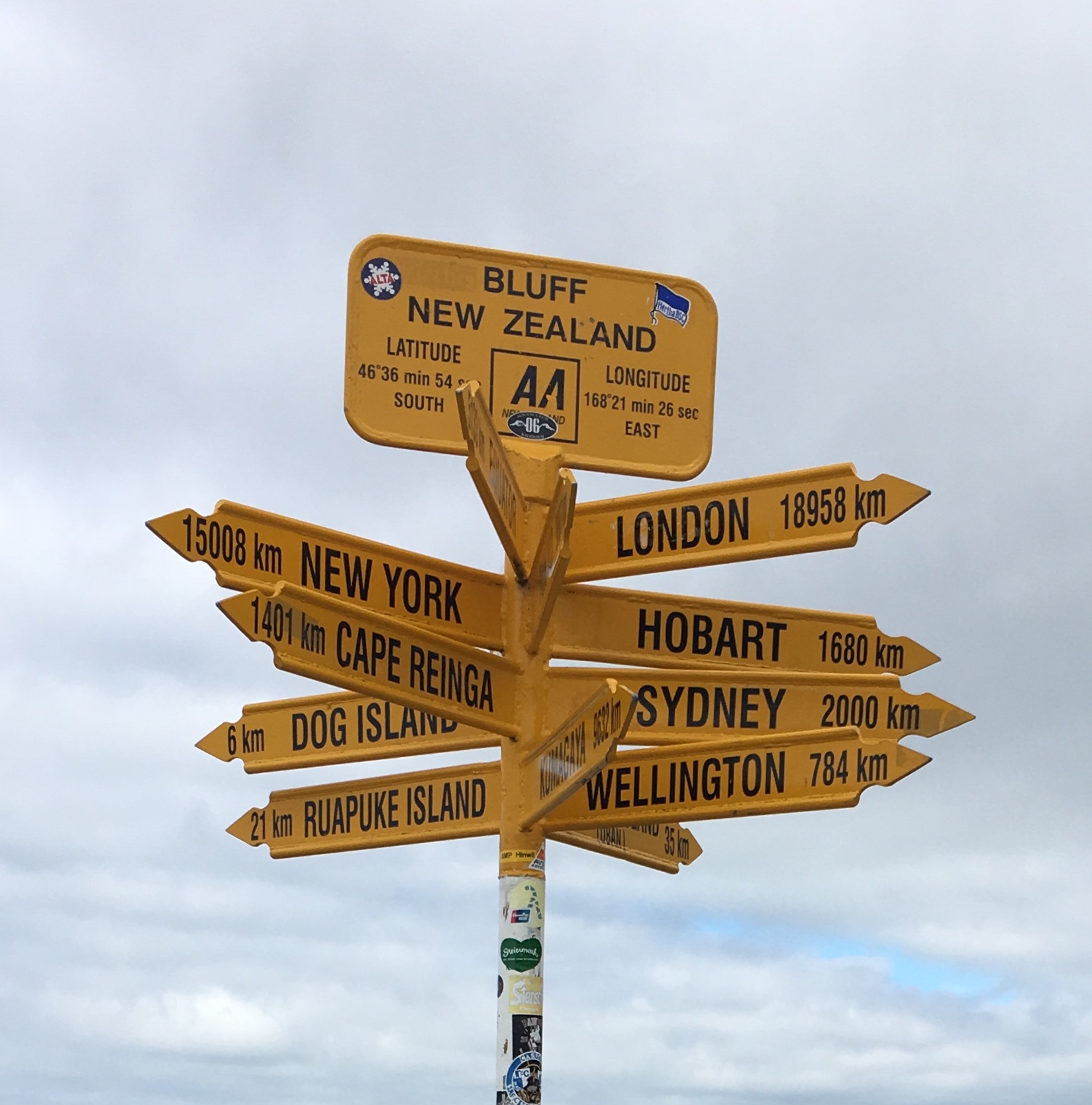 After stopping at Fortrose for a late lunch it is on to Invercargill. This part of the drive is much more relaxing after the 50 – 60 kilometres of gravel roads we have travelled on. The straight and long main road takes us past a large number of true Southland farms where the grass is oh so green and the fields were filled with sheep, cattle, hay bales and swedes. The latter are a common crop on these Southland fields.

Invercargill is a treasure that as you drive in, can sense the harmony of the community. Nothing ostentatious here. Just great Southland spirit. No wonder Tim has stayed here so long extolling the virtues of his city.

After settling into the motel we decide we need a cleansing ale to wash down the dust so off to Waxy O’Shea’s Irish Pub on Dee St for some Irish hospitality and a break to watch more cricket.

We have 2 nights based in Invercargill. When you consider what’s available to view in the surrounding area we are spoilt for choice. As it transpired I haven’t allowed nearly enough time to do this visit justice.

Look out for Alex’s next post next week. In the meantime read more by Alex on GrownUps here or follow the rest of his trip below.

Previous Article The lilt of Irish laughter
Next Article Video: The story of Porsche: From WW2 to the 911

dunedin and the caitlins areas are so special and beautiful.my lebanese ancestors settled in dunedin on arriving in nz.my grandmother and siblings lived in the caitlins and i have precious memories of this area.i have been back as an adult to the caitlins property and taken photos of whats left of the house and school.the stained glass windows are still intact which is wonderful.i have photos of myself with my great aunty standing in front of these buildings.this area is very precious to me and my family!!!! 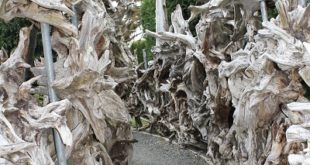