You know you must be getting old when something you have created yourself becomes an artifact in a museum. This has happened to me. In 1959 as a 12-year-old schoolboy I posted my autograph book to a Wellington hotel with a SAE and in due course received back the autographs of the 1959 British and Irish Lions rugby team. Today, my autograph book is with other rugby memorabilia in a display case at the Papakura Museum. The case is part of a supplementary display adjacent to the NZ Rugby Museum’s major travelling exhibition, Balls, Bullets, and Boots. 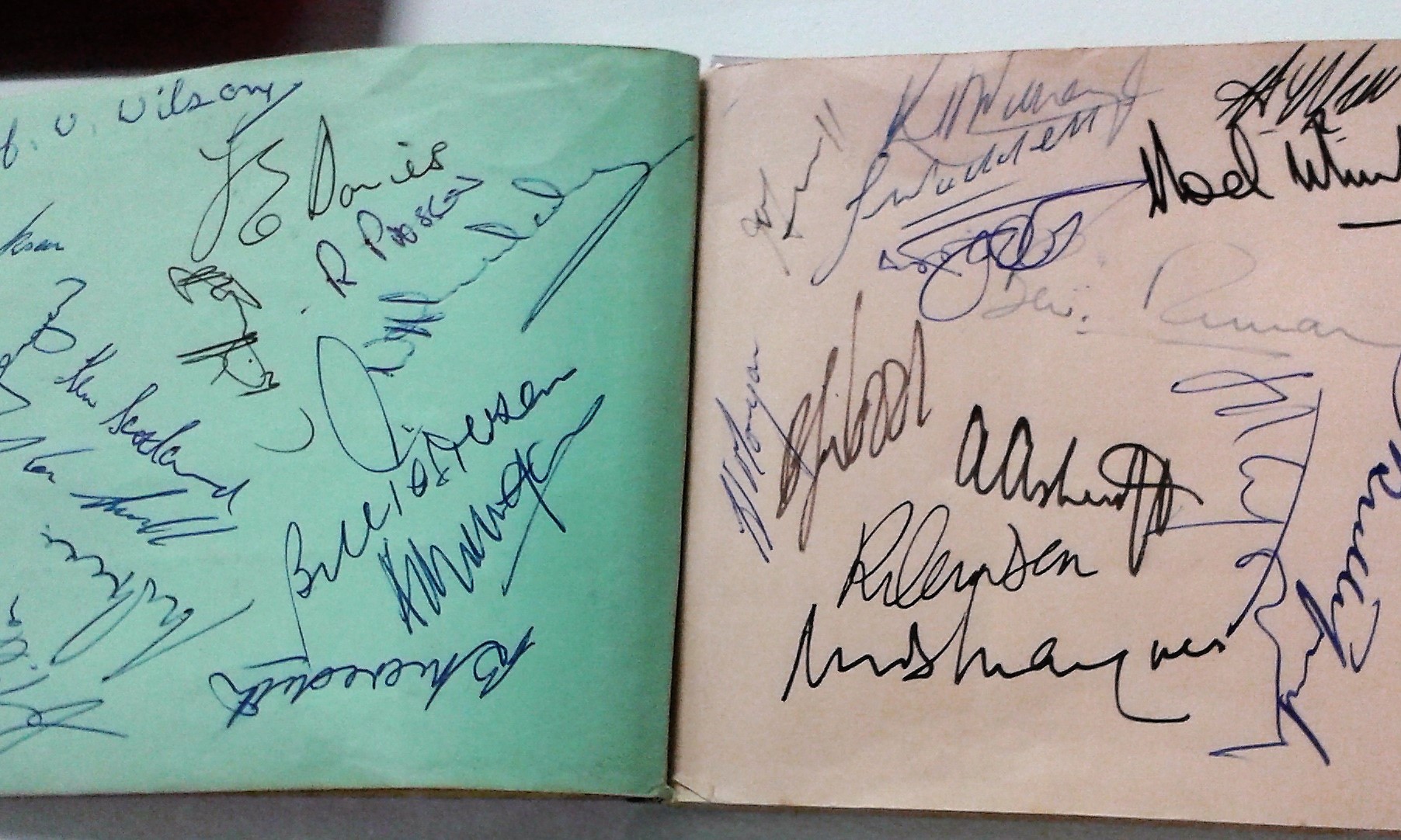 It is quite odd that I still have this autograph book. I have never been a fanatical rugby fan and I own no other rugby memorabilia. Also, I lost interest in collecting autographs soon after getting the Lions’ ones. Over the past 58 years, most of my childhood possessions have disappeared or been discarded as I have shifted house. For some unknown reason, I have held on to my little red autograph book. Sometimes I think I have lost it and it isn’t sighted for years, then it turns up in the most unlikely place. Perhaps it has become some sort of a talisman – a lasting memory of that “other country known as childhood” (to misquote Antoine de Saint Exupery). 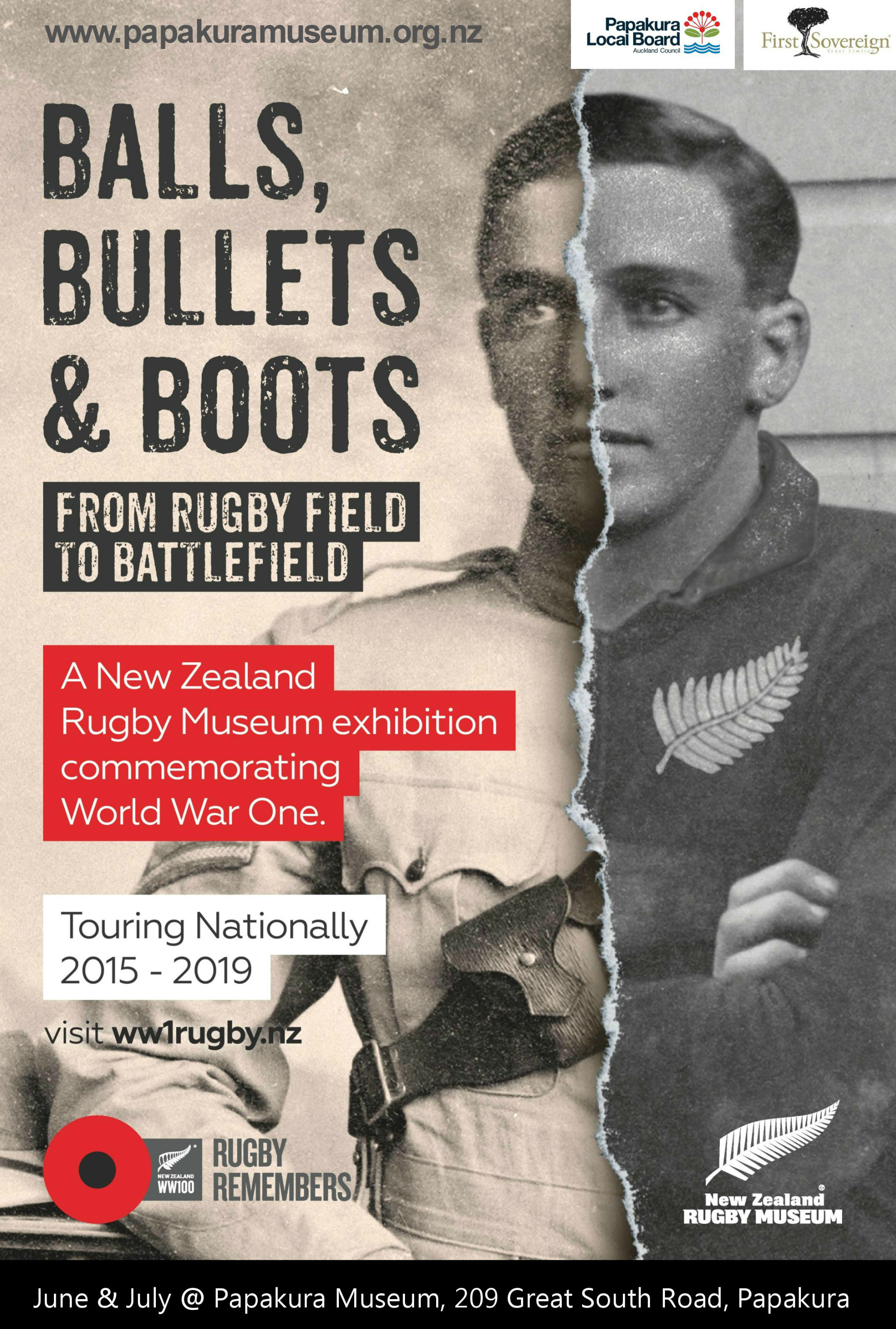 Apart from getting the autographs my only other memory of the 1959 Lions Tour is going with my father and an uncle to see the Lions play Wairarapa Bush in Masterton. In my youth I lived at Te Marua at the foot of the Rimutaka Hill and to get to Masterton involved driving out the end of our driveway and heading straight up the long and winding hill road over to the Wairarapa. I know the Lions won the game. My only real memory is seeing at close range the glamour boy of the team AJP (Tony) O’Reilly and sensing the interest that everyone showed in him. I seem to remember we were close to the field but have no idea whether we were seated in a stand, or just standing along the sideline. Now, as I write, another British and Irish Lions team is touring New Zealand.

This Lions Tour I won’t be seeing any games at the stadiums, instead I will watch a live stream from the internet on my computer. In 1959 I probably would have not heard of computers and the only live stream would have had water flowing down it. Furthermore, it would have been safe to drink! Also, I will not be chasing any autographs from this year’s visiting Lions. My autograph hunting has been sated this time by getting a small rugby ball signed by Kieran Read and Jerome Kaino. The two All Blacks, both with Papakura connections, recently visited the Papakura Museum where I volunteer, to see the Balls, Bullets and Boots exhibition.

There are many commemorative exhibitions and events happening around New Zealand at the moment, as we remember the terrible loss of lives in World War I and the anniversaries of significant wartime events. Sometimes, they focus on an unfortunate family – where several sons died, or the effect the war had on a small local community, or perhaps even a school’s old boys. Balls, Bullets and Boots is a dramatic and thought-provoking exhibition about the All Black players who served in the First World War, and also the rugby matches that were played around the battle fields as a morale boosting exercise for the soldiers. 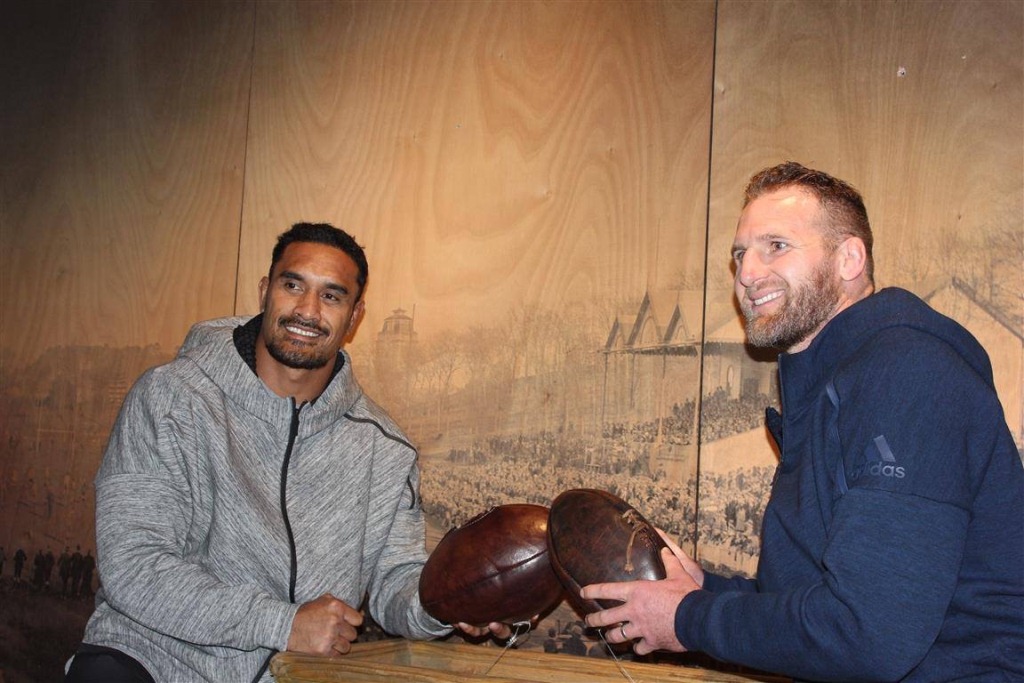 Clive Akers, author of the book of the same name of the exhibition, believes from his research that between 20,000 and 30,000 rugby players enlisted and served in WWI. They included some 50 pre-war All Blacks and an estimated 728 provincial rugby representatives. It is sobering to read as the country is absorbed in the current Lion’s tour that of the fifty All Blacks who went to war, 13 died. Imagine if these days we learned that almost an entire team of All Blacks had lost their lives in battle. Two pre-war All Blacks lost their lives within minutes of each other storming Chunuk Bair, probably almost within sight of each other. Others ended up serving together, almost shoulder to shoulder, on the Western Front. I wonder what current All Black Captain Kieran Read thought as he toured the exhibition and read of the famous 1908 All Black Captain Dave Gallaher who was killed at the front in 1917. I know he and fellow All Black Jerome Kaino were quite moved by the exhibition, and reading of the sacrifices made and wartime camaraderie showed by those who were their predecessors in the black jersey. Many All Blacks and leading provincial players survived the war and returned home to enthusiastically take up playing rugby again, some of them carrying significant wartime injuries.

In 1919 as troops were waiting to go home after the end of the war, a rugby tournament involving all the allied troops was contested in England. This international contest with teams from most of the recognised rugby playing nations of the day has been referred to as rugby’s first world cup. They played for the ‘King’s Cup’ a gold cup donated and presented by King George V.  A New Zealand services team won it and the cup has been in New Zealand ever since being competed for annually by our armed services teams. This historic trophy is shortly to be on display in the Papakura Museum. My little red autograph book will then be in really exalted company.