In this article I hope to postulate a theory that will solve a mystery that has intrigued the scientific community for 120 years. Where did New Zealand’s most famous scientist and Nobel Prize winner, Lord Rutherford get the idea for his theory that the atom consisted of an electrically charged nucleus around which supercharged electrons whizzed?

When you analyse the man, the answer becomes quite clear. Lord Rutherford came from a simple Kiwi country background and spent years as a penniless student at the Canterbury College of the then University of New Zealand.  His was not a life of caviar and champagne, but rather one of baked beans and draught beer.

Baked beans are the key. Anyone who has ever eaten them knows that there are always a few random beans, which despite your best efforts and table manners, insist on flying off the plate or fork, and avoiding your mouth. The tomato-sauced mini-delights land on the tablecloth, the carpet, or your trousers. 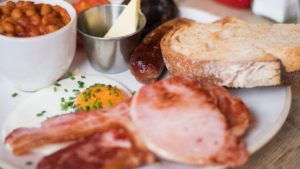 Obviously, young Ernest when pondering weighty matters of nuclear physics in the United Kingdom in 1907 remembered those pairs of tomato stained student worsted trousers he had back in New Zealand. He remembered the errant behaviour of baked beans as they escaped the toast nucleus and made a break for it. From this memory he formulated his theory of the structure of the atom. I often think about Lord Rutherford when I eat my baked beans for breakfast, and clean up the mess afterwards.

It goes without saying that if Lord Rutherford had concentrated on the nutritional and other food aspects of baked beans we all might be less obese and the atom bomb may never had been invented. At least the future of the world does not rest in the hands of skinny desperate men. I like to think that men of more generous proportions tend to act slowly and deliberately in all matters, unless it involves food. Hopefully, the world looks a better place and worth saving on a full stomach.

In my last column when I was once again musing about obesity (there must be a reason for this obsession) I did query whether the medical profession was still able to use such politically incorrect words as ‘fat’ and ‘obese.’ I’m still not sure of the answer but it probably does not matter as the medical profession has a number of coded phrases which mean the same thing. I have discovered one in the last few days. If you ever find in a medical report the following comment, ‘The study was technically challenging due to patient habitus. You can probably guess what the technician is saying to your doctor.

It must be difficult for medical people these days knowing that everything they say or write is going to be Googled but they have only themselves to blame for the poor communication that drives patients to these extremes. According to Dr Google ‘patient habitus’ is now an obsolete and somewhat meaningless medical phrase. Well, it is still in use where I live. Apparently, it is also well used throughout the English speaking world, if the number of on-line posts about it is any indication.

The general opinion is that it is a comment used by technicians to cover their own backs in case they miss something. A sort of ‘it was not my fault I missed it he had a strange body’ approach. Habitus basically means your own particular body build. We all have our own habitus. Hopefully my doctor already knows that along with every other person on the planet, I have my own particular body build. But it was nice the technician pointed it out – in case my doctor was particularly short sighted.