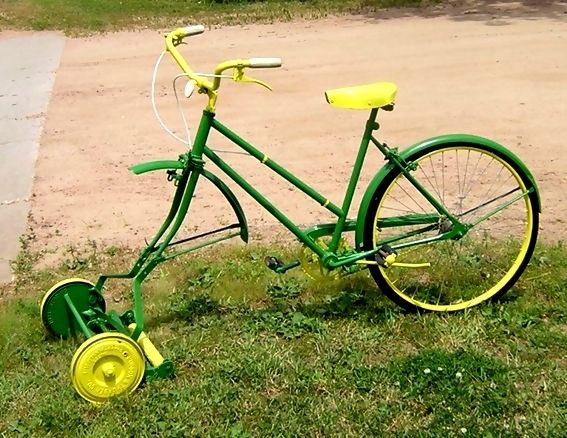 A few days ago I read two news items that really lifted my spirits. The first was a scientific report that said mowing lawns were bad for the environment, and the second was about the invention of a bicycle you could ride on the ater. I believe the bicycle that mows lawns was invented some time ago, but fortunately never caught on.

The not mowing lawns suggestion really appeals to me. It evokes from deep inside me an almost visceral response. It allows me in an acceptable way to get in touch with my ‘inner slob.’ Imagine being able to be lazy and save the environment at the same time. Life can hardly get much better. You see, I have always had a love/hate relationship with my lawns. My dear wife (MDW) would love me to mow them and I hate doing it. Once, many years ago, when she was about nine months heavily pregnant she went out and started mowing the front lawns in full view of the neighbours, hoping to publicly shame me. It didn’t work. We had not been married all that long and she had not realised that it was impossible to shame a lawyer. Indeed all you need to be a successful lawyer is to be totally shameless and to also have the ability to always keep a straight face – particularly when judges are talking.

For readers who missed the article, mowing lawns is bad for two main reasons:

I imagine that if you pay someone to mow your lawns for you that would be the same as buying carbon credits? I do recall that some years ago when for a period I paid someone to mow my lawns there was never any smog about so it must have worked. However, once I removed myself from the paid workforce even I could not justify sitting back and not mowing my own lawns.  I felt guilty being home when the contractor mowed the lawns.  I used to hide behind the curtains so he couldn’t see me and think how lazy I was. Also, MDW and I had after about forty years of marriage reached a sort of compromise. She accepted slightly longer lawns without complaint and I began to feel guilty if they got too long. In other words, marriage had calmed and partly tamed the inner slob.

When I told my friend, and then employer, of my decision to finally give up part-time work in the law he told me that everyone he knew who gave up work early ended up aimlessly wandering around the streets dressed like tramps when they were not propping up the bar at the local RSA before lunchtime. He prophesied a similar fate for me. Perhaps as a result of this comment, it took me several years before I really felt comfortable wandering around my hometown in dirty jeans or shorts and jandals. Now I enjoy the feeling of freedom that giving in to my inner slob has provided. However, I have noticed that fewer people I once knew now seem to recognise me when they pass me on the street. Whether this is deliberate or a result of the hiding in plain sight syndrome I do not really know. Perhaps they so associate me with a wearing a suit that I look a totally different man in dirty jeans, Alternatively, they may just think I have let myself go and am no longer worth acknowledging.

My ageing former colleagues still practice law. I have yet to meet one who enjoys what they are doing and their stress levels seem high and their states of health low. One friend, aged over seventy years, recently returned to work four days after major surgery, as he felt he had no option but to do so. This mindless dedication to work is a trait I have never shared. At about twenty- two years of age I got my first job in a law firm and I can still remember my first day at work. I was employed as a law clerk and my task each morning was to cart the senior partner’s file boxes out of the strong room to his office. As I carried them along the corridor on my first day he said to me, ‘You know Terry until I had my heart attack last year, I used to work to midnight six nights a week and it never did me any harm.’ He was convinced that his heart attack had nothing to do with his work habits so he hardly changed them at all and died from a second heart attack about a year later. Now, fifty years on, it seems to me that a lot of professional folk still haven’t ‘got it.’

I have to report that the excitement around the bike that ran on water didn’t last long. The accompanying video of fit young folk in wetsuits (at least it wasn’t lycra) whizzing around on their bicycle with foils was quite appealing. But, as always, I could rely upon the common-sense observations of my senior cycling mate Pete, who pointed out that to get the bikes up out of the water and onto the foils seemed to require immense energy that we were probably too feeble to attain. Until they were powered by motors, he thought we should give them a miss. I did tell him the ones powered by motors were already available and were usually called boats.

Previous Article My special place in Europe – Northern Italy and Tuscany
Next Article Delightful donkeys – are they the animal companion for you?