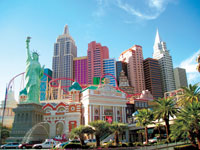 Ted and Sue White come across a little slice of Paris, New York and Venice in Las Vegas

The autumn colours were ablaze with red, orange and gold as Sue and I waved goodbye to Kelowna on October 26.

We were once again on the road, heading south from Canada for the winter, following the well-known North American RVers’ rule, “If the temperature drops below 21 degrees fahrenheit, move in a direction to restore the temperature.”

Our typical travel pattern would have us moving not more than four hours in a day, but for the relocation south to our first major stop, Las Vegas, it would be a fast trip, almost 2300km in three and a half days.

Using a popular Canadian snowbird route, we headed 600km south to a Wal-Mart parking lot in Pendleton, Oregon, where we spent night one with six other rigs on their way to warmer climes. Then it was southeast on day two, about 650km to the municipal parking lot in Jackpot, Nevada, packed with RVs in transit from BC, Alberta, and some of the northern US states.

Day three took us another 540km south to Cathedral Gorge State Park, and by lunchtime on day four we were on site at the Oasis Las Vegas RV Resort (www.oasislasvegasrvresort.com ).

The City of “Lost Wages”, as many like to call it, is a popular stopover for RV snowbirds. Like many of those who stop here, we would be staying a week before continuing our journey, a journey that would last around three months as we worked our way southwards to Cancun, Mexico on the Yucatan Peninsula.

There we would spend at least six weeks in a land of tropical jungles, Mayan ruins, and gorgeous Caribbean beaches, 7500km from our starting point. Along the way though we would make stops of at least two weeks at Lake Havasu City and Phoenix in Arizona, as well as spending a month in Mission, Texas, at the southernmost tip of that state, right alongside the Mexican border.

The travel schedule would assure us consistently good weather with sunny skies, and temperatures typically above 23 degrees celsius during the day.

Consistent with our expectations, the weather in Las Vegas at the beginning of November was good – mostly clear blue skies and daytime temperatures in the mid-twenties, perfect for strolling the Strip to see the sights. And contrary to the impressions held by many of those who have never visited Vegas, it is definitely not necessary to be a gambler to enjoy a visit to “The City of Sin”.

Vegas is like no other place on earth. No expense has been spared on architectural and engineering achievements so visitors need never enter a single casino to be overwhelmed, amazed and entertained. And simply walking the Strip, particularly at night, is an experience to be remembered.

In the words of Ian and Ann Dufty, (who featured in stories for issues 25 and 26 of NZMCD): “We have just got back from two nights at Las Vegas!! What a great time we had, toured the Strip in depth, saw all the sights day and night, couldn’t believe the number of casinos, and the lights at night were beautiful, just as you said. Ann stood and watched Bellagio four times.”

Bellagio, which so intrigued Ann and Ian, is one of the newer casinos. It has a large man-made lake out front where there are daytime half-hourly performances of powerful fountains and waterspouts synchronised to classical music. At night, the performances are every 15 minutes in a lighting extravaganza which has to be at the top of every tourist’s “not to be missed” list. See a video sample of the Bellagio fountains at www.bellagio.com, or use Google Earth coordinates 36 6.78N, 115 10.43W to see it from the air. The Eiffel Tower at Paris Las Vegas is in the same Google Earth frame. 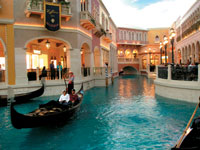 A walk through the lobby at Bellagio presents visitors with what is literally a million dollar view. The ceiling is decorated with more than 1200 enormous glass flowers in a spectacular display of artistry unmatched elsewhere in Vegas. Every one of the newer casinos is unique in its own way, built to impress, and guaranteeing that it takes at least three days to properly explore all of them.

At the Venetian Hotel, for example (www.venetian.com) there is a scaled-down version of the Grand Canal in Venice. This is not a small model on a tabletop and is a fully operational canal, lined with 80 shops and boutiques, and complete with serenaded rides in gondolas. More amazing still, this engineering achievement is not outside the casino – it is two floors up and inside. The entire canal system is supported more than 6m above the main casino area, and is complete with an amazingly realistic fake sky – the clouds even seem to move during a stroll along the canal.

New York, New York (www.nynyhotelcasino.com) has to be one of the most impressive casinos from the outside. It is designed to replicate part of New York City, and includes a scaled down Brooklyn Bridge, Statue of Liberty, Empire State Building, and tugs on the harbour out front. And if that wasn’t enough, a full-sized roller coaster snakes its way around the buildings, sending screams of delight and terror from riders down onto the street below.

Inside New York, New York, row upon row of slot machines disappear off into the distance, enticing players with brightly flashing lights, an endless variety of electronic tunes, and the sound of jackpots being won.

A little further south on Las Vegas Blvd is the Luxor (www.luxor.com), a glass pyramid 32-stories high that has its entrance through a scaled-down version of the Sphinx.

The world’s most powerful beam of light shines from the Cyclop’s eye at the top of the pyramid, a 43.2 billion candlepower light that can be seen from planes almost 400km away, and is a Vegas landmark after dark. Inside the Luxor is the world’s largest atrium – the guest rooms are angled inwards as the pyramid rises upwards, enclosing a central space more than 100m high.

Another favourite with visitors is the Paris Las Vegas Casino (www.harrahs.com), easily spotted on the Strip because of the half scale replica of the Eiffel Tower in front of the hotel. Visitors can take an elevator ride to the top, 80m above street level, for great views of the Strip.

Inside, the metal girders of the base of the tower run right through the casino, making the décor unusual, to say the least. And a visit to Vegas would not be complete without seeing the volcanoes erupt at the Mirage (www.mirage.com), or the pirate battle on the ocean in front of Treasure Island Casino (www.treasureisland.com). There is so much to see that visitors might even forget to gamble, although everything, of course, runs 24 hours a day, seven days a week.

At the time of writing, no less than four different Cirque Du Soleil shows were running in Las Vegas in multi-million dollar, specially built theatres where the stages can flood in a moment to become lakes or transform into sheets of ice.

During one scene of KA at the MGM Grand, the 150 tonne, 8m x 16m, stage spins slowly around and actually turns vertical, dumping an entire beach scene, including the sand, into the orchestra pit, while leaving a dozen or so actors to carry out an acrobatic battle on the vertical surface. (More information on this technology can be found at www.tisfoon.com/cirquedusoleilka.html).

Cirque Du Soleil is not the only act in town, there are literally dozens of incredible magic shows, costume extravaganzas, superstars like Celine Dion, and of course the signature shows for Vegas – topless dancers and the Follies.

Virtually all employ “spare no expense” technology and special effects that cannot be seen anywhere else. 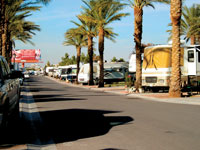 Snowbirds are not the only RVers who visit Las Vegas and the casinos have recognised the importance of catering to RVers year round.

Several have their own full hook-up RV parks and there are almost a dozen privately-operated RV parks around the city. Together, they offer more than 2400 full hook-up sites, many with cable TV, telephone, and wireless internet access. In addition, there are shuttle services running from most of the locations directly to the main part of the Strip.

For anyone contemplating a motorhome holiday from Los Angeles or San Francisco, serious consideration should be given to including amazing Las Vegas as a stopping point. Just four and a half hours (450km) from LA, or 10 hours (940km) driving time from San Francisco, Las Vegas is easily incorporated into a circle tour of California.

Words and photos by Ted White

Hello! Good Site! Thanks you! zfthmektyle 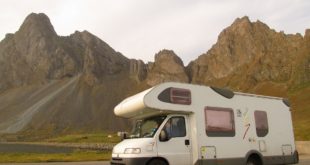