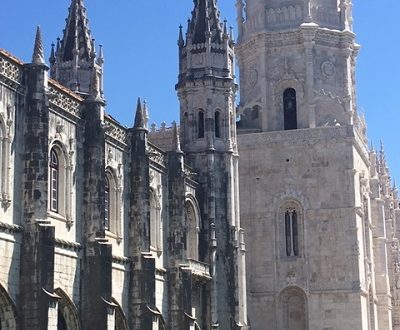 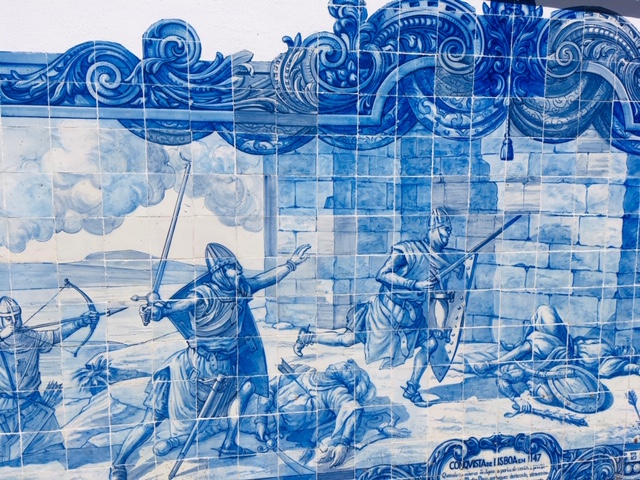 Lisbon is an old European city, steeped in history and very affordable. It has recently joined the list of European cities at risk of serious overtourism so we went in May before the height of the tourist season and it was not too crowded at all.

Lisbon’s distinctive feature is the many buildings covered in striking blue and white Portuguese tiles called azulejos. These were brought to Portugal in the fifteenth century when it was under Moorish rule. Since the 1950’s there has been an azulejos revival and artists are creating many contemporary tiled murals around the city and in the Metro stations. There was also a great deal of street art and plenty of buskers added to the lively atmosphere of the city.

We stayed in an old house in the Alfama district of Lisbon, about 20 mins walk from Baixa, the central Lisbon neighbourhood. In the 1600s it was occupied by Lisbon’s wealthy (it is close to the castle) but the 1755 earthquake caused massive destruction. The wealthy decamped for other suburbs, leaving the area to the poor, then immigrants and more recently to more of a bohemian crowd.

Christiana the apartment owner lived upstairs. The house was once owned by her great grandfather. She was a retired air hostess who has visited New Zealand twice. We were her first Kiwi guests. To welcome us she had filled a bowl with locally grown kiwi fruit and nesperas, a small sweet fruit picked from her family’s garden, such a thoughtful gesture. 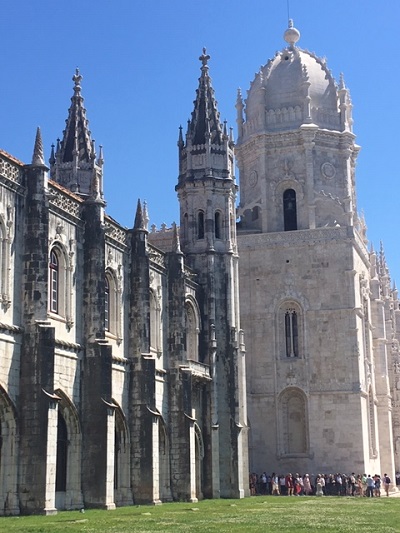 Just up from our apartment, in a grand old building there was a contemporary group art exhibition on the theme of reimagining the city. And in the park over the road a pop up craft market was in full swing with handmade jewellery, pottery and clothes on offer. At such times the fact that I don’t speak Portuguese can be frustrating as I would have loved to have a chat with some of the stallholders.

On our first day we took a tram and bus to Belem to the Jeronimos Monastery. There were big crowds in the huge church (probably because there is no entry charge so tour guides use it) but far fewer in the Monastery cloisters which require payment. Actually it didn’t break the bank as entry to museums and rail travel in Lisbon is half of the already fairly cheap price for oldies. We saw Vasco da Gama’s grave there whom John vaguely remembered from his third form Social Studies class where they studied early explorers.

The other museum we went to in Lisbon was the Coach museum where its collection of very ornate royal coaches from as far back as 1600 is fascinating. They must have been an uncomfortable ride because of their lack of suspension but it was probably better than walking along muddy streets. Conveniently the earliest coaches had a built-in potty under the seat cushions.

We avoided the tourist trams and had a cheaper and more authentic experience on the quaint old yellow trams which the locals use. The tram rides were remarkable. The trams only just fit in the narrow streets and are horrendously overcrowded. We were packed in like a can of Portuguese sardines and when standing had to hold on for dear life as the tram rumbled and shook and came to sudden unexpected halts. The windows are free of glass to let the air in, and allow one to commune with those in the street. It pays not to let your head or arm out though, as you’ll soon hit a wall or parked truck.

Rick Steve’s guidebook came in handy for his three self-guided city walks .We started in the Alfama district (but gave the castle a miss because of the long queue) and headed for Lisbon’s elegant central neighbourhood Baixa where we took our time meandering around the impressive avenues and plazas. Lunch was in a cute restaurant sitting under chandeliers where we were table-served a three course meal for under 10 Euros each (with beer/wine). At that price no sandwiches on the run for us! 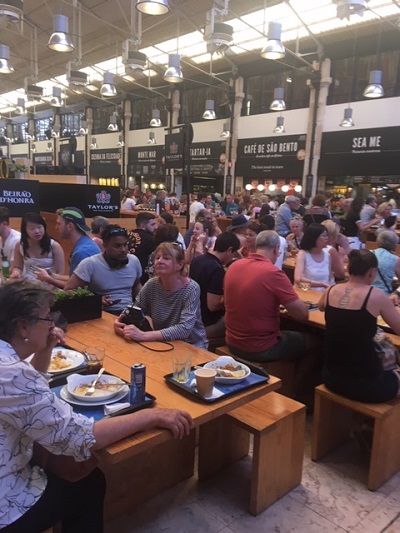 After lunch we went up in the funicular to the Bairro Alto district for our last walk from the book. Three Rick Steve’s city walks in one day was rather excessive but it is such fascinating city to explore that we just kept going. It was 9 hours before we returned to the apartment where we chilled out in front of the BBC news with a platter of  bread, olives and cheese and a glass of Portuguese vino .

A good friend of ours had visited Portugal some years ago and loved it except for the food. Times have changed and finding a good meal is easy now. We ate very well twice at a Mercado, an enormous covered food market, where you can choose your meal from many different stalls. In some the food is designed by Lisbon’s top chefs. After dinner we just had to try a couple of Portugal’s famous sweet little custard tarts (pastels de Nata) which are seriously addictive.

It was an all too short visit to this fascinating city but it was time to move on. Our apartment hostess gave us a lift to the Santa Apolonia station (Lisbon’s oldest railway station built in 1865) from where it would be a 4 hour journey North to Braga.

Previous Article Joke – How Many Dogs does it Take to Screw in a Light Bulb?
Next Article Caring for loved ones going through cancer treatment 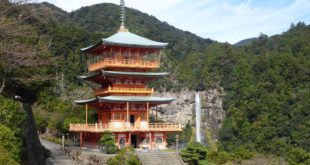 November is our favourite time of the year to visit Japan because of the beautiful ...