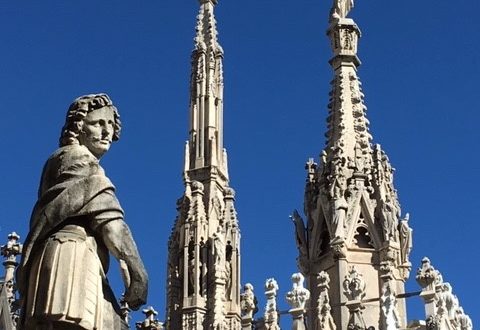 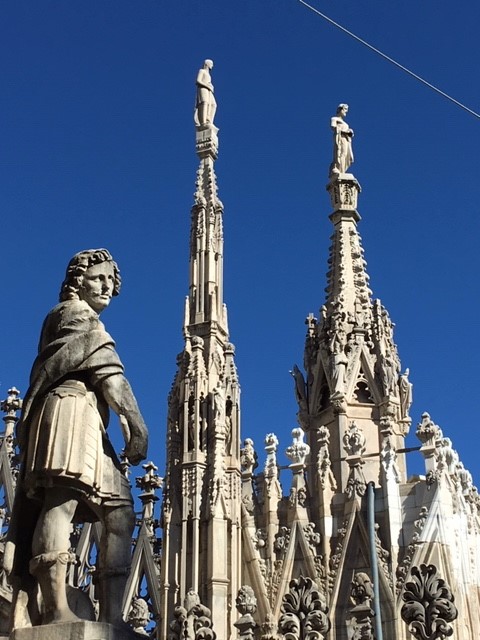 We left Bangkok in the evening and arrived in Milan the next morning for just a two night stay. Despite feeling rather weary after the long flight we didn’t give into jet lag as we really wanted to make the most of our very brief time there.

I rifled through my hand luggage wondering what to wear. It would have to be jeans, my pink puffer jacket and sneakers. I had been told that the dress code was more formal and stylish in Milan, being one of the fashion capitals of the world. But once outside on the street I was pleasantly surprised to find that that was exactly what most people were wearing, although their puffer jackets were almost invariably a rather more stylish black.

Our hotel here was just a two minute walk from the Central Station so with the aid of cheap rapid transit passes we were soon out and about. We visited an art gallery and  looked at a couple of old churches and decided that if we came early on the Sunday we would hopefully avoid the long tourist queues to see the Duomo, Milan’s cathedral, the largest cathedral in Italy. Begun in the late 1300s it took almost 600 years to complete. 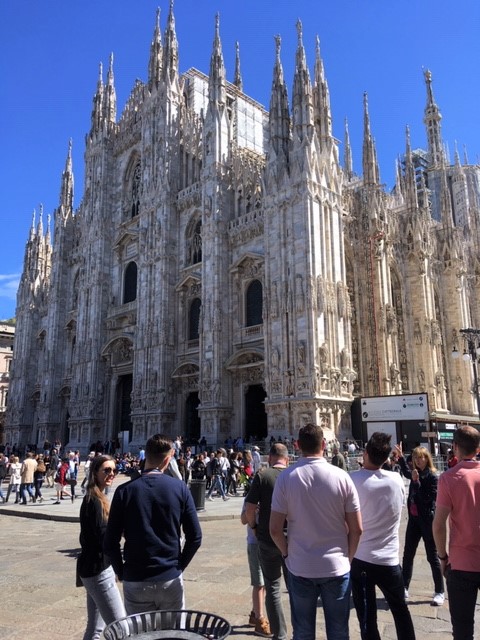 Lunch was in one of Milan’s charming literary cafes where you can help yourself to a book from their book shelves. What a shame we only have a few words of Italian so we couldn’t enjoy reading as we ate! But the tomato, mozzarella and basil salad drizzled with olive oil and a scattering of rocket tasted fresh and scrumptious.

We set off for the cathedral early the following morning and as we had hoped there was only a very short queue. It is truly magnificent, made from pink-hued white marble. The nave is 500 feet long, and the top is 330 feet high. It can hold 40,000 worshippers!  Our tickets included a lift to the terraces at the top from where we meandered around like old mountain goats admiring the close ups of the statues and gargoyles and had a great view over the city extending to the alps in the distance.

Later we walked to Sforza castle built by the Duke of Milan on the remnants of a 14th century fortification. It was renovated and enlarged in the 16th and 17th centuries. It houses a museum which contains the last of Michelangelo’s Pietas, still unfinished as he died in his nineties while sculpting it. There was a hushed and reverent atmosphere in this space as people stood to admire his last magnificent work of art. 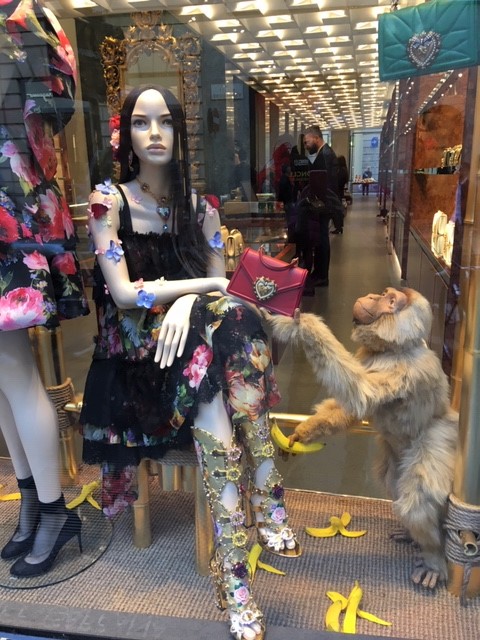 Outside the Sforza castle was a bustling high end craft market with very stylish handmade jewellery and clothes by local designers, just beautiful but expensive and in any case there was no room in my hand luggage.

A quick tour of Milan’s exclusive shopping precinct followed. The window displays by brands like Versace and Armani ranged from the spectacular to the slightly bizarre. Afterwards we treated ourselves to a pizza followed by a gelato before we called it a night.

The following afternoon we were off to Sienna. This marked the end of our hotel stays until the very end of our trip as we would be in self-catering apartments from now on. The absence of huge hotel breakfasts would probably be best for our waistlines.

Previous Article Video: do you miss the 1980s? check out this stereotypical ad from 1984
Next Article Zucchini noodles with pesto 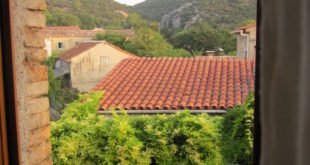 ‘Provence’ rolls rather smoothly off the tongue, as do a host of other romantic destinations ...