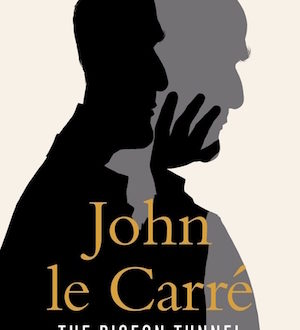 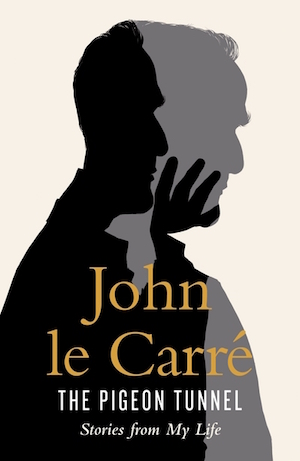 Some people’s lives are stranger than fiction. This was the feeling I got as I read John Le Carre’s autobiography The Pigeon Tunnel. He is a consummate spinner of yarns, some so intriguing that I sometimes wondered if he had somewhat stretched the truth.

Thrillers are not my preferred genre and I have read none of John Le Carre’s. But I enjoyed reading about his encounters with politicians and a bunch of other interesting people.

The part which touched me most was about his difficult relationship with his con man father.

My partner John is an avid thriller reader and not only brings stacks of them home from the library but has downloaded dozens of them on his kindle. I wondered if this autobiography would meet with his approval. His views follow:

“John le Carre is famous for his many thrillers. But The Pigeon Tunnel marks a departure from these. It is an autobiography, and his first non-fiction book.

It gives great insight into his early days working for the British spy agency MI6, and his later life as a novelist. Many of the characters in his novels are based on the real lives of the people he met during this time.

John le Carre (a pseudonym for his real name Cornwall) was born in 1931, and first visited Germany at the end of his high school education in 1949. After majoring in German at University, and a short spell teaching at Eton, he worked in the British embassy in Bonn during the cold war.

Germany was a divided country in those days, and the communist threat was very real. While his time working for MI6 was relatively brief, the contacts he made, and the impressions of life as a spy on both sides of the iron curtain coloured his later life as a novelist.

Le Carre has many anecdotes of his life working for the British government.  During the course of his work he met many politicians, both from the East and the West, and also became acquainted with some notorious figures such as Kim Philby and George Blake.

The bulk of the book is however about his life as a novelist, and the myriad of people he met during his fifty years as a novelist. The fact that he had once worked for M16 led many of his foreign contacts to believe that he was still a British agent, and so they would try to use him to get information to his western contacts.

One of le Carre’s anecdotes regards a story told to him by a highly ranked Russian, Yevgeny Primakov, who insisted that Saddam Hussein had told him that he wished to leave Kuwait prior to the first Gulf war, as long as he could do so in a manner that didn’t involve loss of face. He was asked to take the message directly to American President Bush and to British PM Thatcher so that war could be avoided. Both would have none of it, preferring war to an Iraqi withdrawal.

Other parts of the book are more personal. He always had a difficult relationship with his father Ronnie, who was a true con-man. He first became aware of this as a schoolboy, when he was sent to Paris to try and persuade one of his father’s contacts to give him some money.

As le Carre became increasingly wealthy through his writing he was frequently asked to bail his father out from difficult situations, which adds another aspect to this famous novelist’s life.

This book is a good read. It tends to waver a little in the second half, as some of the stories become a little repetitive, but overall it will appeal to the large number of le Carre fans, and also to those who enjoy a well-written but anecdotal description of many of the important events that have shaped our world in the past seventy years.