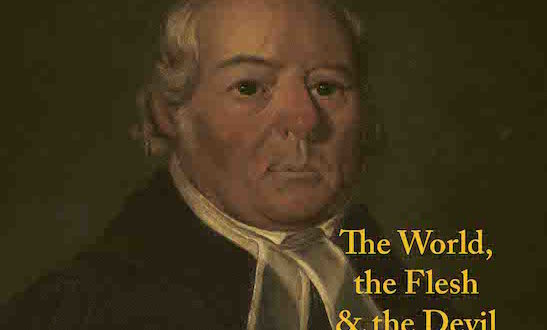 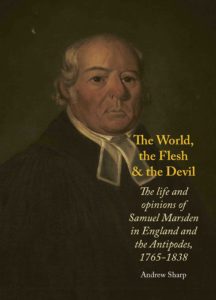 Samuel Marsden is best remembered in New Zealand as the first man to preach the Christian message on Christmas day 1814 and as one of our founding fathers.

But in Australia his reputation was a darker one. He was known as “the flogging parson” who was dismissed by Governor McQuarry for exceeding his jurisdiction.

So just who was Samuel Marsden and what motivated him to do battle against the Prince of Darkness all his life.

Andrew Sharp, Emeritus Professor of Political Studies at the University of Auckland explores Marsden’s life and opinions  in The World, the Flesh & the Devil , a hefty tome which took me most of January to read.

After an evangelical training in England the newly married Marsden arrived in Sydney on March 1794 to become a chaplain to the penal colony in New South Wales. He was appalled by the vice and immorality he encountered there.

Not one to mince his words he preached sermons full of hellfire and brimstone:

“You who are addicted to whoredoms, to drunkenness, to perjury, to robberies, to Sabbath-breaking and profane swearing .Your life may end dreadfully here; it will certainly end awfully in hell.”

But his attempts to persuade them to live a more godly life fell largely on deaf ears.

Marsden was keen to both civilize and evangelise aboriginals. But he was thwarted in his efforts to teach them agricultural skills because they kept moving from place to place. He thought them totally different from any other race of men he had known and wrote contemptuously

“The natives have no reflection. They have no attachment, and they have no wants.”

In the penal colony of New South Wales he held the dual roles of priest and magistrate.

While not denying that Marsden did order miscreants to be flogged (a not uncommon punishment in those days) Andrew Sharp sets out to show that Marsden did not order this punishment to be used excessively, and the accusations that he did so were unfair and politically motivated.

Marsden was a tireless worker. Having been granted some land he also became a very successful and prosperous farmer who ploughed much of the profits he made back into funding his missionary endeavors.

After befriending and hosting some Maori at his home in Paramatta he came to the conclusion that although they were governed by Satan the New Zealanders were a fertile soil for the harvest the missionaries might ultimately reap.

On returning from a visit home in 1809 he fortuitously encountered one of the other passengers, Ruatara a Maori chief, who became ill. Marsden took care of him and as their friendship grew he thought he could count on him to protect the mission he wanted to establish in New Zealand.

Marsden enlisted a small group of missionaries who were both committed to spreading the gospel but also had a useful trade so that the dual aim of civilizing and evangelizing Maori could be achieved.

But the establishment of the first mission in New Zealand was held up when the crew and passengers, about 70 in all, of the Boyd were attacked and eaten by Maori in 1809.

Marsden was less horrified by this act of cannibalism than many of his contemporaries. He pointed out that it had not been an unprovoked attack but was caused by the merciless flogging on board of Te Ara, the son of a Whangaroa chief so it had been an act of retribution.

This book is all about Marsden, his life and opinions. We only hear his side of the story. Marsden saw Maori as heathen, but respected them more than many of his contemporaries. He thought them an intelligent and noble race, men of great perseverance and enterprise and although warlike he found that among their friends and family the rangitira were cheerful, loving and peaceful ‘.

But what Maori thought of Marsden and his small team of missionaries who strove to turn their lives around when they already had their own spirituality, customs and way of life is not recorded. One thing they did want from him was muskets, but Marsden had no wish to engage in the arms trade.

The blunt and by todays’ standards blatantly racist Marsden was in many ways the polar opposite to the more charitable and tolerant ministers of religion we are familiar with today. And New Zealand as Marsden experienced it was also a vastly different and rougher country.

My overriding feeling after reading this book was gratefulness that we have come a long way since then and have grown into a much more tolerant, peaceful and multicultural society

The World, the Flesh & the Devil will no doubt find a place in libraries as an important piece of research and will also appeal to churchgoers and others interested in New Zealand history.

But I fear its sheer length will put many readers off. Which is a shame as it is a fascinating account of life in nineteenth century New South Wales and New Zealand as seen through Marsden’s evangelical lens.